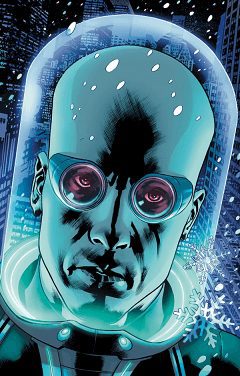 Joker is at play and he wants Batman to join in the fun before everything gets really dark.

Batman is on his way to the local amusement park because Joker has taken over and fitted everyone with collars that will blast them with Joker Gas at his whim. When the Dark Knight arrives, he is told that the only way to end the night with everyone safe is to play the games and ride the rides with the Clown Prince of Crime.

Knowing there is more to the Joker’s game than that, Batman must bide his time and play along so that he can discover what Joker really wants and hopefully stop him before it’s too late. At the same time, Lex Luthor visits a makeshift lab to make one of Batman’s rogues an offer.

Peter J Tomasi pens a classic Batman vs Joker story in this issue. He does a great job of not only establishing the stakes Batman faces but also tying the story into the bigger Year of the Villain arc to come. It’s interesting to see how Joker chooses to continue when faced with something coming that he cannot control. Tomasi peppers the story with those ideas as it progresses and the pace of the story from beginning to end is entertaining.

Doug Mahnke delivers some amazing art in this issue. Joker looks gloriously menacing in every page and the character details are fantastic.