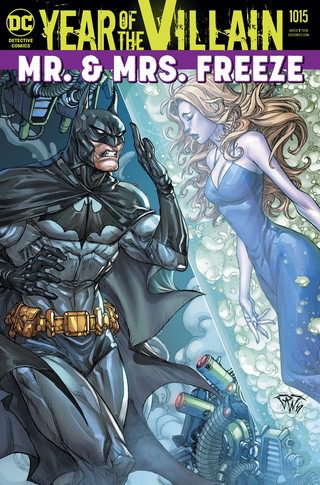 It’s Nora Fries unleashed as Victor finds that the serum Lex gave him has some unexpected side effects.

While Batman, Lucius Fox, and Alfred work on a cure for the women Mr. Freeze used to resurrect his wife, the happy couple are causing chaos across the city as they build up their nest egg and prepare to escape. Unfortunately, there is trouble in paradise as Nora becomes increasingly more aggressive during their robberies and Victor becoming concerned that the serum he received from Lex Luthor might have altered his wife in ways he couldn’t imagine.

When Nora decides to venture out on her own, Victor is left with no choice but to reach out to the Dark Knight to help him find his runaway bride.

I am impressed with the pace and plotting of this issue. Tomasi takes the time to build up the story by showing the growing tension between Victor and Nora while also highlighting Bruce’s desperation to be on the streets stopping them as the rest of his team tries to keep him focused on finding a cure. It’s a great story that delivers both character and action. Everything about this issue, especially its cliffhanger ending, calls out to read what comes next.

The beautiful and detailed art from both Doug Mahnke and Jose Luis perfectly complements the story. The characters look amazing and each page is beautiful to look at.