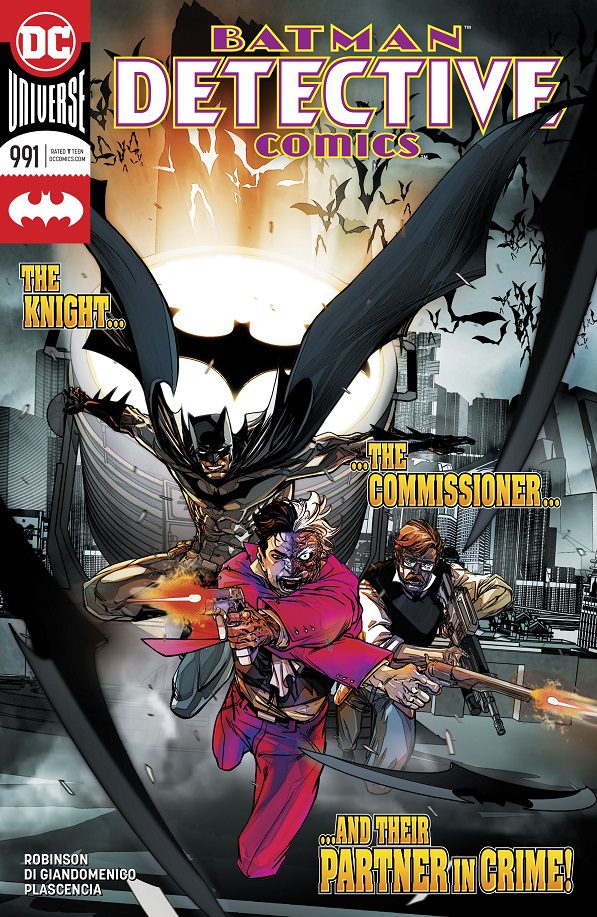 Two-Face and Batman face each other in Harvey’s latest hideout. There’s no guns, no batarangs and no fighting. Both sides decide it’s finally time to talk. When Gordon arrives, things get momentarily out of control, but Batman does some Batman s#$% and things get back on track. Batman has managed to figure out most of what Harvey’s plan was and the detective and commissioner decide to go to Harvey to get the rest. Unfortunately, for them, Two-Face is in charge and Harvey cannot be reached.

What becomes more interesting is that Two-Face has a vested interest in Batman and Gordon figuring out what happened because it implicates someone close to the three of them and puts Two-Face’s entire existence into question. As the three of them lay out the information that they have, Two-Face proposes a strange alliance. One that just might save the city from a KOBRA attack and give Two-Face a way to help Harvey.

This is a very interesting issue and the story is told in a compelling and engaging way. Robinson does a great job of keeping the suspense going as Two-Face gives Batman and Gordon the information they’ve been looking for. At the same time, Robinson allows Two-Face to reveal some vulnerability after he reveals the information about Harvey. It’s a really good character moment that is unexpected in this context. It also adds an interesting psychological and philosophical aspect to the nature of the Harvey Dent/ Two-Face dynamic.

The art by Carmine Di Giandomenico is stunning in this issue. All of the panels from the wide shot of the bridge to the close-up panels of Harvey are amazing. I enjoyed the level of detail and the style of the art in this issue immensely. A great read that is setting up something interesting to come.