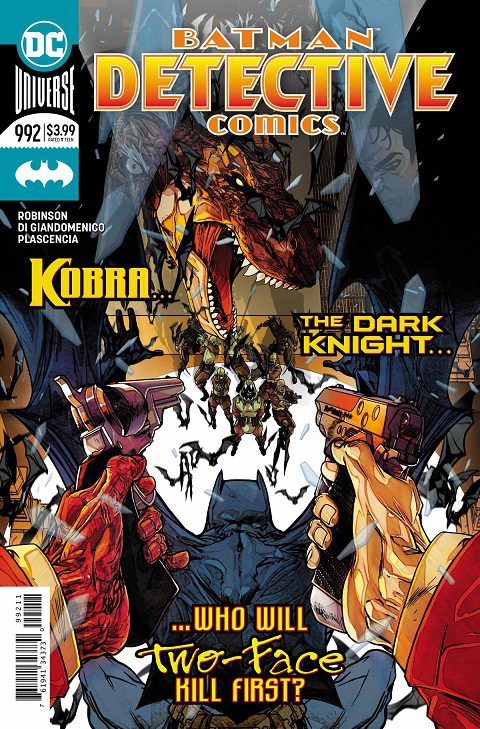 The detective and the former District Attorney share their thoughts on the organization known as Kobra and the possibility of what their plans for Gotham might be as the organization sends a team into the Gotham Museum to attack a gala full of people. When the find the place empty, Batman and Two-Face confront them. The resulting fight leaves some extensive destruction in its wake, but it also leaves Batman with a clue to what Kobra’s real mission is.

As Harvey and Batman go back and forth about how Kobra’s plan is linked to the original victim that brought the two of them together, the reader discovers that the coordinated attacks from Kobra met with an equally coordinated response from Batman’s allies including Black Lightning, Batgirl, Signal, and Orphan. In the aftermath, Batman discovers what Kobra’s real plan is and if they succeed, Gotham will be devastated.

What I continue to find compelling about Detective Comics and Robinson’s run on it is that there is care to have Batman put into the role of detective. There is a more investigatory feel to the stories that remind readers that Batman is more than a brawler. What is also refreshing is that Batman’s matter of fact tone with Harvey is not snide or sarcastic, but seems to be more teacher/student in its delivery. Even though Batman does not trust Harvey Dent in the slightest, there is almost that hint that Bruce is still trying to reach Harvey in a way. That makes for effective drama in this story arc.

Carmine Di Giandomenico’s art in this issue is beautiful. There are some great action filled panels and the overall style matches perfectly with the gritty tone of the story.