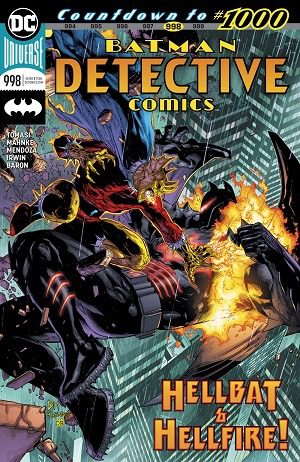 Batman’s mission to find the mastermind behind the attacks on the people he cares for expands when an old friend needs help.

After confronting Hugo Strange about his illegal experiments, Alfred calls to tell him that Jason Blood needs his help. Not taking a call from his friend and mentor lightly, Batman employs the Hellbat. He’s going to need it as a demon with a unique connection to Batman feeds off the energy of the demon Etrigan.

Batman is going to push his body, his skills and his armor to the limit to defeat the unrelenting demon and save his friend before both Etrigan and Blood find themselves dragged down to the pits of Hell itself.

Peter J Tomasi has done a great job of building this strange and unique story to an even stranger cliffhanger. All of the stories beats work and the dialogue is great. Both Bruce’s inner monologue and his conversations with both Strange and Silas Stone are great reads and showcase aspects of Batman that establish his drive and personality. This is an entertaining issue with an intriguing and surprising cliffhanger ending.

Doug Mahnke’s art is gorgeous. There are so many beautifully detailed panels and pages that the eye is constantly in motion. The art perfectly captures the tone and dark gravity of the story.