With the darkness black, I chock the light! No brightest day escapes my sight! I turn the dawn to midnight! Beware my power, Dawnbreakers might!

Bruce Wayne of Earth -32 has a very different origin story compared to his world famous counterpart. As his parents lay dying in his arms at the hands of Joe Chill, destiny had something different in store for this young Wayne. As Bruce lays their with his dying parents a Green Lantern Ring finds  him. To Bruce this was more than just a corps ring, it was a means of revenge. Filling the ring with the blackness that now embodied his soul, Bruce was able to power through the Ring’s mandates and rules, corrupting it with his dark power. After killing Joe Chill, his vengeance wasn’t satisfied and he would use the now corrupted ring to become the protector of Gotham City, a Green Lantern, who executes criminals without mercy.

Diamond Select’s Dawnbreak statue stands a towering 9 inches tall as the figure floats above a cloud of green energy, taking the form of terrifying bats. Design by Caesar and sculpted by Alterton this Green Lantern will become the most haunting emerald warrior in your collection. Based of the Dark Nights comics from Scott Snyder and Greg Capullo, this ghastly crossover between Batman and Green Lantern is not the guy you want to meet in a dark alley, friend or foe. Never before has an emerald warrior appeared so menacing. Caesar really captures the rage behind this Bruce Wayne as he wields his will to terrify and vaporize the villains and heroes of his world.

The Dawnbreaker stands on his toes floating via a cloud of green bats and molten goo. He dawns you typical green lantern color scheme as black and metallic green covers his body. His highlighting features include the melding of the Green Lantern and Bat symbol on his front and center and immediately catches the eye as he puffs his chest in sadistic confidence. Unfortunately this is also my least favorite part of the piece as the logo combination looks unfinished and faded compared to the rest of the piece and design. It’s a glaring flaw that punches you in the face every time you look at the statue as the rest of the suit and design are immaculate.

The sleek design with subtle detail really sells not only the Green Lantern influence but also Bruce’s sadistic new outlook on crime fighting. Giving the ring to Wayne brings out a cold, metallic and almost robotic version of the Green Lantern. This savior of Gotham features intentionally off putting googles that compliment a sinister grin that could give the Joker a run for his money. The design also features hydraulics, and wires bringing to mind a lot of Borg vibes which only adds to the villainous nature of the look and feel of this statue. It’s scary, the stand is scary, the color scheme and textures will give you chills, and that smile let’s you know darkness has arrived.

Have you seen this:
Diamond Selects Fall 2021 Lineup 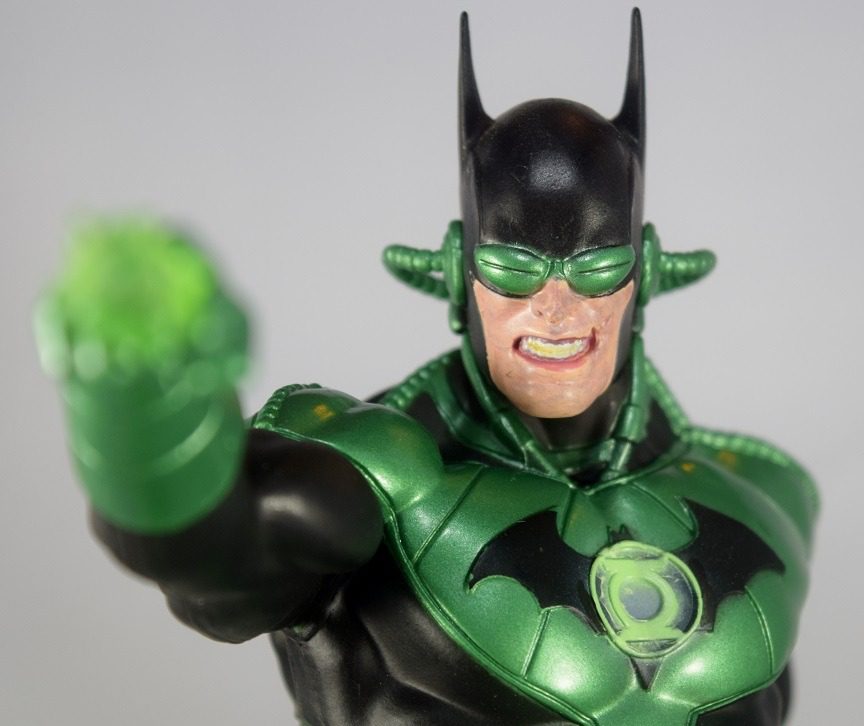 Scott Snyder and Greg Capullo’s Dark Nights Metal is a cornucopia of amazing designs and The Dawnbreaker is no exception. Caesar and Alterton created a statue that embraces and expands on the work of Snyder and Capullo in the best way possible. Outside a minor flaw in the logo, seeing The Dawnbreaker sitting in front of me on a be of Bat constructs, gleefully taking a kill shot is any uncomfortable pleasure I didn’t know I wanted. Diamond  Select continues to create affordable, well made, gorgeous pieces and this one is no different. Muster the will inside of you and find a way to bring the might of The Dawnbreaker to your collection.