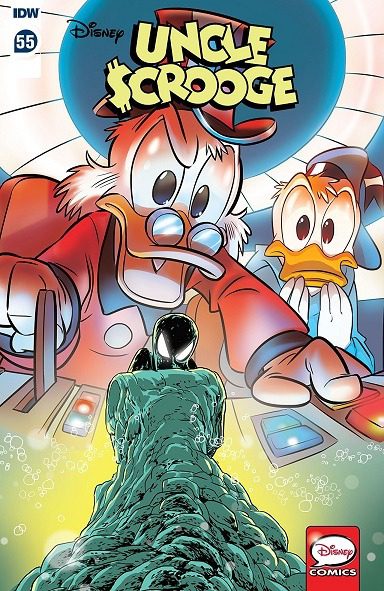 If you ask me the Duck family has one up on the Mouses in a certain Magical Kingdom.  They have their own little universe where none of the other characters exist.  The only thing is that despite his claims to Mickey, Donald isnt the leader of this club…rather its Uncle Scrooge.

If you’ve never encountered Scrooge McDuck there are only two things you need to know.  He knows how to make money and how to hold onto it as well.  While his acquiring is done ethically through a combination of wit, skill and sometimes luck, his holding onto it is what causes his family most problems.  See Uncle Scrooge the kinda guy who can really pinch a penny…think one drink and four straws.

Despite his “thriftiness” Scrooge manages to maintain the affections and interests of his nephews.  With Huey, Dewey and Louie it is their love for the adventures Uncle Scrooge takes them on.  For Donald it is more a sense of familial responsibility and respect for his Uncle.  We witness both of these views in this issue of Disneys Uncle Scrooge.  How is that possible? Well Scrooge isn’t always stingy and so this issue contains two parts.  A prologue and the main story.

The prologue highlights the McDuck Dynasty.  This vast fortune was passed down from McDuck through the ages until it came to Uncle Scrooge. He of course proceeds to hide the fortune until and unwitting Donald moves it and sinks it into the ocean.  Normally this would mark the day of the Dynastic Rant, Uncle Scrooge’s yearly reminder to Donald about his mistake.  This year, however, finds McDuck planning to retrieve his treasure.

McDuck succeeds in retrieving his treasure, but what happened to Rockerduck and why was he down there after the treasure?

Those questions must wait because one of the coins found with the rest of the McDuck Dynasty doesn’t seem to come from the past but rather the future. So a rub of it causes a glimpse into the life of a decedent of Uncle Scrooge.  This second arc continues to highlight everything there is to love about Uncle Scrooge and his nephews, the youthful inspired adventurousness of this group.

Whether the present or the future the DuckTales Universe has always presented itself as a fun, lighthearted adventure.  Uncle Scrooge #55 stays true to that formula.  It provided glimpses of familiar characters like Gyro and introduced a cast of characters from the future. As for the art, these are classic characters and while you can notice a slight touch up to their designs the drawings stay true to form. Likewise the colors while vibrant still remain true to the original versions.  Why would you mess with what is great already?  That would cost more…and this Uncle Scrooge after all.