Doctor Who The Seventh Doctor #1 Review 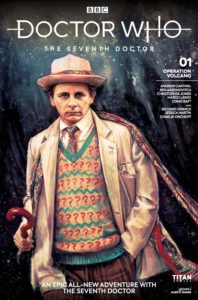 Gosh, I love Classic Doctor Who, and I love the Seventh Doctor, even if some of his episodes were… not so good, but they were fun none-the-less, which is why I was ecstatic to learn that Titan Comics was going to produce a short run of Seventh Doctor comics. And now, here I am, ready to tell you how absolutely happy I was when I read the first issue (which contains two stories mind you, not the regular one part each issue contains).

My nerdy mind exploded when I recognized the two female characters introduced at the beginning of Allison and Rachel, who were from the Seventh Doctor episode “Remembrance of the Daleks.” Think of Rachel as the original Scientific Advisor before the Doctor ever got that position and, well, Allison is her assistant. It was great to see nods to that episode – like Ace’s preferred bacon sandwich which she had at the very same diner drawn in the comic. The story so far is that there’s a spacecraft that crashed in the midst of a volcanic eruption on Earth, and who’s better to sort this stuff out than the Doctor?

No one, it was rhetorical.

Of course, there’s a side storyline of people seeming to be getting taken over by presumably whatever was in that crashed spacecraft, along with one of the characters being found some time in the future, in some sort of stasis.

The art is gorgeous as always. Titan Comics really knows how to choose their artists and colorists which gives all their comics such a complete, and beautiful look, that I’ve come to expect from the Doctor Who comics. But I’m not done folks, oh no, for you see, there is another story in this first issue, packed again with nostalgia from the McCoy era. 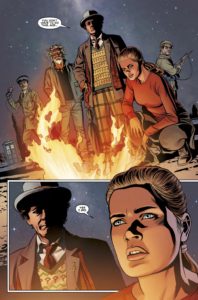 If you are familiar with Classic Who and McCoy’s tenure as the Doctor, then you should be familiar, to an extent, with the episode “The Greatest Show in the Galaxy” which centers around a psychic circus overruled by evil. One character is named Mags and is an alien werewolf. This story is what she did next after the Doctor and Ace left. She now runs the circus, and in this story, takes the circus to her home planet, the one she was kidnapped from. There, we see her home planet is in a state of utter depression and has become segregated, made to wear armbands displaying who and what they are at all times; an utter Nazi parallel. Mags, of course, calls the Doctor and Ace for help, and there is something special about the one-millionth performance. What is it? I have no idea!

Now, let’s remark on the art. The artist is none other than Mags herself! The actress who played her in “The Greatest Show in the Galaxy” drew the art for this comic herself, breathing new life into the character she once portrayed. She’s as talented an artist as she is an actor, and I can’t wait to see more of her illustration in the next two parts.

An excellent introduction to the Seventh Doctor in Titan Comics!

andrew cartmel Doctor Who titan comics
Add your voice!Join the conversation on Discord...
Join Our Discord