I had the pleasure of interviewing another fantastic artist from Emerald City Comic Con, Peter Mohrbacher. Check it out!

GWW:So, I saw your booth at Emerald City Comic Con, how was the show this year for you?

Peter Mohrbacher: Emerald City Comic Con was great. Seattle shows a lot of love to artists and they’ve been incredibly generous to me.

GWW: Was this your first year at ECCC?

PM: I had a booth last year, but this was my first year on the main floor. There is a huge demand to be a part of it since ECCC has such a great reputation among creators, so I felt really lucky to get a spot this year.

GWW: Have you been to other Comic Cons?

PM: I’ve been doing conventions all around the country starting back in 2002. It gives me an opportunity to wag my finger and say “back in my day” a whole lot.

GWW: If so, what has been your favorite so far?

PM: My favorite con every year is Dragoncon in Atlanta because it’s really just a giant fan convention without all the massive media and corporate presence that is such a large part of comic cons these days. Back in my day…

GWW:Have you seen anyone cosplay as any of your angels yet?

PM: I’ve had a couple of cosplayers threaten to do it, but none of taken on the task. I don’t really blame them, my designs for Angelarium range from impractical to impossible. If there was a greater fan demand to see them done, I think someone would make it happen.

GWW:Have you always wanted to be an artist?PM: I used to think I was going to work in some sort of mechanical field as an engineer or a mechanic. My favorite thing to do is pick apart complicated systems and understand how they work. It wasn’t until right at the point where I was choosing where to go to college that I realized that could be applied to art as well as machines.

GWW:What is your favorite medium to work on? Digital, pen, paint?

PM: I’ve been fascinated by digital painting since all the way back to the early days of Photoshop and MS paint before that. Since my work has a natural, brushy look to it, a lot of people assume that I must have a history of oil painting but I’ve been digital since the beginning. The toolset in Photoshop is so flexible, I feel like I can make art as fast as I can think about it. It’s really a wonderful experience.

GWW: What is your typical process for creating a piece? I know on your website that you mentioned that the angel names are what inspired you, can you expand on that?

PM: All the Angels have properties associated with them. To me, they exist as a personification of a concept or experience. Everyone thinks about the things in their life as having spirits because we all want to personify the world around us. My designs are just that. I think about my own personal associations with the concept like rain and I draw on those personal associations to try to create a personification of that thing. I usually just do that as a pencil sketch and finish the piece up in digital paint.

GWW: How do you decide what gender to make the angels; do you keep them the same genders as the mythologies?

PM: I try to keep their gender in line with the mythology. The Emanations are each gendered differently, based on their the position on the Tree of Life while Seraphim don’t have genders and Watchers are all males. The confusing part for most people comes from the fact that I mix male and female physical traits between them without much regard for their actual gender. For something as strange and mysterious as an Angel, I don’t think they sweat the social pressures to conform to gender norms.

GWW: How long does one piece normally take you to complete?

PM: I like to spend about a week or two on each piece, to give it time to percolate but I usually only spend about 20 hours actually painting each one.div>

GWW: What is your favorite part of creating an art piece?

PM: The time I spend painting can be a real joy. It’s far better that thinking about future work or looking back on work that’s already been done. The main reason I’ve painted so much is because the process of making the brush strokes just feels good.

PM: I’ve sought out collaborators to both illustrate my designs as well as make designs for me to illustrate. That collaboration creates a really special connection that I can’t resist indulging in from time to time.

GWW: Do you have any other companies or people that you work with regularly?

PM: The people I work with these days are printers and licensing partners. They’ve replaced the relationships I used to have with publishers and probably for the better. It’s great having someone take my art and make something great out of it, especially when we both have a share of the profits at the end.

GWW: Do you have any other projects that you are working on now?

PM: Aside from Angelarium, I have a web show that I release weekly called One Fantastic Week. It’s an inside look at the lives and businesses of independent artists. We get guests 3 out of 4 weeks to come on the show and share what they’ve been up to. My co-host Sam Flegal and I also take time periodically to share our own experiences creating and operating our own art brands. It’s a show made for artists who want to learn more about the ways that art making, creativity, and business all intersect.

GWW: Do you have any other hobbies that you enjoy in your spare time?

PM: The thing that makes me happiest to do with my time is painting. But I’m also a glutton for video games and gaming news. I don’t get a ton of time to dive deep into it, but it’s something of a lifelong obsession for me.

You can find Pete’s artwork and more at his website: https://www.angelarium.net/

You can also find him on other social media:

He is running a special promotion for his Patreon campaign right now where anyone signed up before April 30th gets one of these Limited Edition enamel pins. 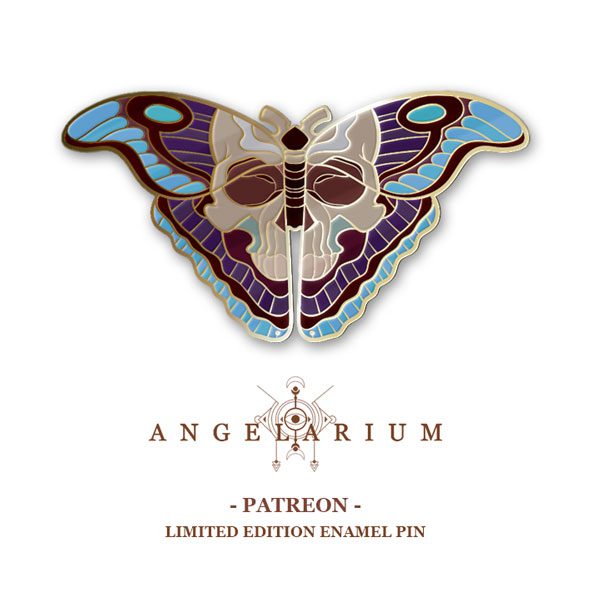