Emily’s Dating a Henchman in 1X04 of Powerless Review 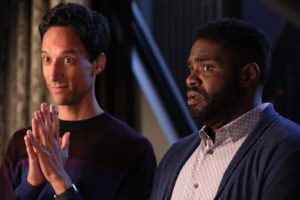 Powerless seems to have found its stride a little in this episode. I enjoyed the first part of the episode and the banter between Teddy (Danny Pudi) and Ron (Ron Funches), especially Ron comparing Batman to a rapper who saves lives and their fight over a found batarang. In typical sitcom fashion, the episode mainly revolves around Emily’s (Vanessa Hudgens) inability to find love in the big city.  Jackie (Christina Kirk) offers her some help and advice in order to get Emily out of her hair and, along with Wendy (Jennie Pierson), they decide to go out together that night to look for guys.

Meanwhile, the batarang mystery intensifies when Van (Alan Tudyk) learns about it and tells the guys about a mishap he had with Batman in the past and how he wants to see him again face to face. After Jackie departs, Emily meets a guy that she feels meets the standards of the list she’s prepared in her mind to keep her from having to settle. Dan is a doctor and she instantly connects with him. She gives him her number and as she leaves the bar, he goes to another room, revealing himself to be a henchman for the Riddler. 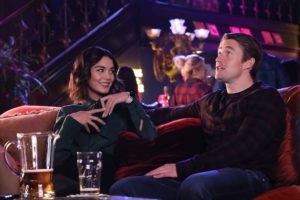 After Emily takes Dan to meet her co-workers, they are immediately suspicious of the fact that he has a Green Lantern ring shaped fist print in the side of his face. They ascertain that Dan is a henchman and start debating whether or not to tell Emily. What’s funny about his scene is that it’s so un-ironic, as if people date henchmen all the time. Jackie’s comparison to dating a bass player is particularly funny and her deadpan delivery makes that line work.

After activating the homing beacon on the batarang they found, Ron decides to try and lure Batman to the roof of the building by leaving him milk and cookies like Santa Claus. Van appears and there is a hilarious back and forth between the three of them about Van’s choice of dress. 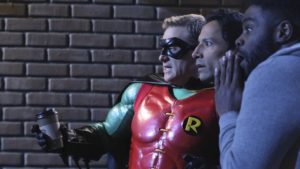 Emily continues to be oblivious to who Dan is as her co-workers finally decide to tell her. It finally starts to dawn on her as she tells them that he plans to take her to his boss’ place for the weekend which includes his shark tank, ruby laser and its carved into the side of a mountain. Meanwhile, Teddy and Ron discover that Van is wearing a Robin costume under his suit in a bid to be Batman’s next sidekick. A move that has Teddy and Ron question whether a middle aged man with back problems is the right choice and that two Robins have supposedly died on the job already. Van is undeterred.

Teddy, Ron and Van decide to try and lure Batman into an alley, where they are immediately robbed. Emily confronts Dan who admits to being a henchman. The final scene that wraps up the episode is very funny and helped me appreciate the show a little more than I did last week’s episode.

The need for references in this episode was necessary to the overall plot and they did a really good job of not being too overt with them (other than the Greek Lantern one). The episode was funny, especially the banter between Van, Teddy and Ron. Their scenes together made this episode gel. Hopefully, they continue to improve.