Any aspiring artist will tell you that finding inspiration can be a difficult process. Ideas come and go, but the most unique ideas are the ones that set well-known authors above all the rest. As an aspiring author myself, I look to such great writers as JK Rowling and CS Friedman. Is it weird that they’re both female, but also have their name abbreviated as well? While both authors helped inspire my desire to create something unique, I have always struggled with fleshing my ideas out.

On my external hard drive, I have a folder dedicated to random ideas, a list of cool-sounding names, and small story arcs that fit nowhere. Some files contain lengthy paragraphs while others contain one word. In one book I’m working on, I have pieces of various chapters fleshed out. However, I’ll often find myself with no way to get from one point to another. I know where I’m at, and where I want to go, but no idea on how to get there. I’ll ask myself: Am I overcomplicating the process? Does this character’s name sound relatable enough? Does this other guy need to be a villain, or would a female work better in this setting?

As you can tell, I probably sound like an anxious, scatterbrained mess. I am. In recent years, I’ve been looking to manga for inspiration. One of my favorites, Kentauro Miura’s Berserk, has been a constant of inspiration for the kind of tone I’d like my book to have. ONE’s One Punch Man and Mob Psycho 100 are an excellent mix of character depth and exciting fight elements mixed into simple yet powerful storytelling devices. The late Tadashi Kawashima’s Alive: The Final Evolution is definitely worth mention for its unique take on aliens, super powers, and their marriage with emotional content.

One manga in particular that I’d always considered a guilty pleasure due to its eccentric characters, outlandish scenarios, and packed more male bravado than you could shake a stick at, was Hirohiku Araki’s JoJo’s Bizarre Adventure. I started watching the anime almost 3 years ago, continuing every so often since then, but it wasn’t a series I would have considered a reliable source of inspiration. That is until I received a copy of Araki’s latest book, Manga in Theory and Practice. After reading the first few pages, I immediately found it to be a reliable distillery of information.

You might think, that since manga authors also tend to be artists of their own stories, that a book discussing the practice of following what Araki affectionally deems “the manga royal road”, a western aspiring writer could not possibly find guidance or instruction from such a book. You’re wrong, and here’s why.

Have you seen this:
GeekOPedia: Nottingham Launch

Chapter 2 - subjectively the most important chapter of the book - was an eye-opening read for me. Again, while Araki focuses on aspects for a manga, Chapter 2 revolves around what Araki highlights as the four Major fundamentals of manga structure; character, story, setting, and themes. Okay, so while this may seem like something you and I learned late in high school or college, the chapter does much more to point out the obvious, and what I found was Araki made me realize that I am a visual thinker. I mean, it’s something I always knew, but I never thought of using visual mechanics for thinking about my story. I know, I sound dense don’t I?

It helped me to think outside my own box; that if I wanted to better develop my characters, Araki’s advice and guidance could help me to visualize my characters, even if I didn’t draw them out. My mind was blown open. My point is; the book helped me to see a missing puzzle piece that I had been trying to find for years. After that epiphany, I spent the next few weeks reading, rereading, and putting stickies wherever applicable. Never so quickly did a piece of literature become such an essential part of my creative process.

How To Write a Story

I learned even more about how to progress my story in Chapter 4. One of the most interesting parts I found was centered around what Araki calls “ki-shō-ten-ketsu”. I won’t spoil specifics on what it stands for, but it basically centers around the development of your story; how to get from point A to point B with a natural and interesting feeling of progression. While this in no way means there’s only one way to write a story, this particular chapter highlights the importance of how to go about it while staying on “the manga royal road”. In a particular section, Araki states, “The ki-shō-ten-ketsu structure is a way of thinking that you need to internalize through your daily life in order for it to become less something you have to think about and more like a kind of muscle memory.”  This particular quote struck a chord with me.

To better apply this technique in my story, I first had to apply it to my day-to-day living habits. The more I thought about my story and where I wanted it to go, I would often find myself back where I started, but twice as frustrated and agitated. I was thinking about it too much. I would then hit a point where I didn’t even want to approach my notes. Instead, I’d go work on other ideas, or play some Battlefield. But after reading that particular quote, I was able to see two things:

With ki-shō-ten-ketsu, I not only have a map that aids in my story progression but I’ve also got a handy tool that helps me evaluate my day with a storyboard approach.

Wisdom is What You Interpret

The book adds quite a bit of artistic references, so even if you’re not a writer, but an artist/creator looking to make your mark in the comics industry, this book is even more perfect for you. There’s a lot of cross-appeal between manga and comics; the only real difference being color (and finality). Both genres tend to inspire each other, and many creators have admitted to finding their influences from their foreign compatriots. You’ll find a lot of that in this book. Long story longer, if you’re an artist looking to find inspiration, there are lots of notes in this book for you too. Araki places a lot of choice panels to provide examples for storytelling, emphasis, and so on. While I found those examples to be helpful for describing a scene in a paragraph, I’m not trying to draw my characters. But an artist looking to find a good example to transition from panel-to-panel may find this resource very handy. 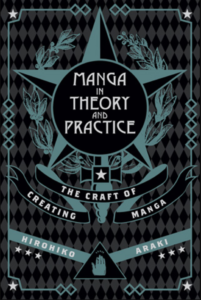 I received so much insight from a few sentences here and there, I was overwhelmed by such a happy accident falling into my lap. Manga in Theory and Practice is a breath of fresh air for creators stuck in a rut, but it’s also for anyone looking for wisdom, or just a really good book to curl up with. There was so much more information throughout the book that allows aspiring writers to advance in ways they might not have thought possible. As creative as we may think we are, we’re often stuck in our own little box, unable or unwilling to budge or bend to someone else’s creative will. This book reminds us to find inspiration in our surroundings, make life a daily story, and no matter what: write down an idea before you forget it.

You can find yourself a copy on Amazon or at your nearest Barnes & Noble.