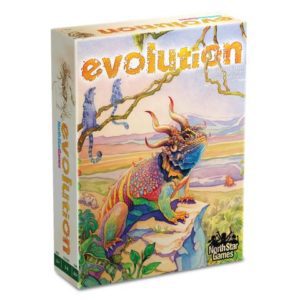 Board Games might be one of my biggest hobbies. Trying to get friends and family into this past time can be challenging. But every once in a while, a game comes along that everyone can understand. I tried
out Evolution: The Beginning recently with my wife who enjoys the classics; Monopoly and Life. Even with a 7month old in our laps, we found The Beginning a very simple version of the game that relies on
the basics of the base game; eat the food and adapt. It was a great start to a new experience for someone set in their “classic” board game ways. However, the game is for 2 or more players, turns got stale with just two players keeping the same species alive and not being aggressive.

A big product expansion is coming from North Star Games as they are set to launch their video game adaption of Evolution. With single player and multiplayer functions expanding the branding to a new audience. I first had the chance to talk with Scott Rencher who is the President of North Star Digital and followed up with Dominic Crapuchettes who is the Founder and Designer behind Evolution. 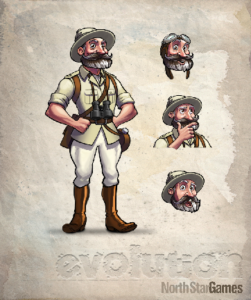 Geeks World Wide: How long has this board game been around

Scott Rencher: The game has been around for 3 years now, 2014, and since then we have added three other products in the line; Flight – the first expansion, Climate – which is a stand-alone, and The Beginning - which is a streamlined game

GWW: Was your intention to create Evolution into a PC/Mobile game or did it…evolve…along the way?

SR: It actually was. Right after the launch in 2014, we thought we were onto something, people really just felt this game. It’s been this epic thing, we can all relate to and understand. It’s about adapting to what’s going on what’s around. So we thought it was a game we really wanted to get out there. Widen the exposure let people experience the game. It’s pretty clean, it’s pretty elegantly designed.

GWW: Has it taken you these 4 years to develop the video game? What has kept this so long in the
running?

SR: This has only been in development for 2 years now. I think what has taken it so long is we really don’t want to make a board game conversion. We really wanted to make a stand-alone game that is just a great game by itself. 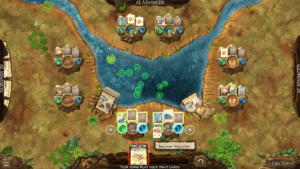 GWW: So how much is the computer version like the board game.

SR: It has the exact model of the board game in it. But what we did, was we kind of dissected it, so when
you first start playing you start with the simplest concepts. It started with the basics walking you through the possible traits and resources, it tells you how to do every action.

GWW: What was the biggest hurdle making this as a video game.

SR: There is definitely a lot of information in the game in the actions you can do. And we wanted people to have an easy time understanding what they can do as well as having the visuals. We wanted to give the right information at the right time. The reason it has taken us so long, is we have had to throw away the game 4 times now. Just from changing the motion of doing actions went from just clicking to dragging a card. I mean, the game is in full 3d, so we went from a 2d game to a full 3d so there are the visuals and depth.

GWW: That was one thing I really love about the board game is the art and the pieces that come with the game. The box alone has wonderful art. Other than this first tutorial of the video game, is there more artwork, more visuals?

SR: There is. There are the cards themselves, there will be a map for the campaign so you can build a campaign out of your playthroughs along with challenges and classes. There are different ways to win the game; you can be aggressive, you can play defensive. We’re going to code those in as distinct personalities so when you go up against that boss in the campaign, you have to figure out how to beat them. 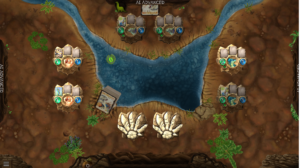 GWW: Do you see a competitive play in the game, either in a tournament or just organized play set?

SR: We definitely do. With the video game we really want to highlight the competitive nature of the game. So we are launching the Kickstarter September 12th for the multiplayer function of the game. We have the single player feature ready to go, so we are going to raise money for the matchmaking system. So the lobby will have a play now and the game will match you with someone of similar skill level and based on how you play you go up or down. We’re going to have tournaments and have quarterly seasons. And whoever is at the top of each season will have a real live tournament.

GWW: Gamers, both board, and video see a lot of tournaments nowadays with live events and titles. And with this being a board game and video game it is a nice transition from a “Friday Night Game Night” event to a competitive level. As people browse by and see the game, what really draws them in?

SR: I think the key thing is for a booth like this is the artwork. We have the massive banner with the art on it. I think the other thing is the theme. The mechanics of the game are really tightly interwoven with the theme of survival and adapting. Sometimes you eat, and sometimes you don’t. You try one tactic and it doesn’t work so you keep trying until you find something that works, that is until it doesn’t anymore. 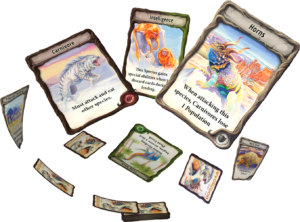 GWW: For future expansions in the video game, is that something that is easier to manage on the PC
version versus the board game, like Climate for example?

SR: That’s a good question. The first thing we are going to do with the video game is work on the current expansions like Flight, and get those into the video game. It’s probably harder for the digital expansion because it takes longer for coding and the graphics of it after you have the new concept. We do plan on having digitally exclusive content beyond the campaign and challenges, creating variation and different scenarios at the start of each game.

GWW: The Kickstarter Launches September 12th, but when is game officially out.

SR: We are going to do our own open access next month as a beta. The full release will be in the first half
of next year. We want to make sure we have the game where we want it to be, with the beta and art and actions within the game. Having a polished product in the end.

And now, an interview with the game’s designer.

Geeks World Wide: How did this game get its origin

Dominic Crapuchettes: I’m a game designer, I was a pro-Magic Player. I love great games; I love the mechanics. I say I am the designer, but I inherited the design from a Russian biologist. He put together more of a simulation than a game. It was a fine game with great elements but had some glaring flaws. So I began to try and fix the issues and got it to where it is now. 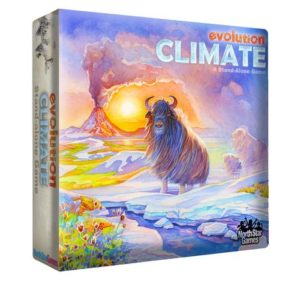 GWW: For you (Dominic) as the designer of Evolution, what has been the most enjoyable experience
along the way?

DC: I’d say the most enjoyable thing has been the response we have gotten from the academic community. We get emails weekly of people are bringing it into the classroom and getting an amazing response from its use. The game was covered by magazines like Science and Nature, prestigious science journals. It has been used by Stuart West who is a professor of Evolutionary biology at the University of Oxford. There is a book teaching secondary educators how to incorporate Evolution into their teaching.

GWW: Those are some impressive accolades. Being older in life, I never realized a board game like this could help teach younger learners science. Just passing by this game, the concept of Evolution is straight forward to those who have an understanding of it already. Going forward with the game, is there anything you hope to further achieve?

DC: Continue the brand. It’s a great brand something that is different than what is out there. This game is about adapting to the game. Players are out there trying to look for this killer strategy whether its being aggressive, defensive or something different, there really isn’t a set “way to win” as the game keeps changing. The real strategy is figuring out what ecosystem is in play, making that work to your advantage before it changes on you again. 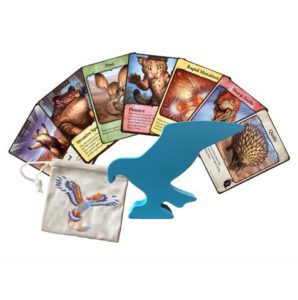 GWW: You have plenty of expansions out there now. Do you have any plans for future expansions, ones that are more fruitful?

DC: Lots of plans. There is a prototype we are working on, Oceans, which will be out at next Gen Con, 2018.

DC: For people who don’t know the brand, we have an entrance level game for anyone in the family or who isn’t into board games. It’s out at Target. We didn’t dumb down the game. We made it streamlined, shorter and simpler. It’s a really good introductory point. We are going to keep building on the game with expansions like Plants and Diseases. There is a lot to look forward to.

Evolution – The Video Game launches on Kickstarter September 12th , “The main benefit we want to highlight is that this is an opportunity to back us and play the Closed Beta, as soon as DAY ONE. After our campaign closes on October 17th! Once the Kickstarter ends in October, the beta signup will close until the game launches in 2018.”