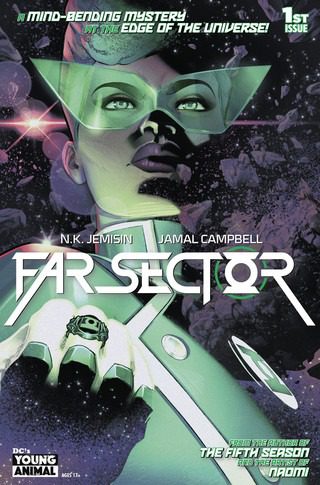 This is the coming-out party for Jamal Campbell as an all-star caliber comic artist. DC is sitting on the next generational talent and it’s here at the launch of this new maxiseries that they have unleashed Campbell’s considerable talents upon the world. I’m not breaking any headlines here for fans that picked up DC’s title Naomi, the Brian Michael Bendis penned titled had its share of attention upon release, but here Campbell is the one doing the heavy lifting on a series that is so beautifully drawn that fans will flock just to look at the artwork. Sadly, this is where the praise for Far Sector stops.

Jemison has made a career out of writing Sci-Fi and fantasy novels, but with this first foray into comics, it’s easy to see that this newcomer is out of her depth. While the narrative of Far Sector centers on the main character of Sojourner “Jo” Mullein and her new responsibilities of being the Green Lantern that patrols the bustling space mega-metropolis of City Enduring, the story is dragged down quickly in its own minutia of heady concepts and dense world-building. Jemison is trying to be too clever for her own good and it costs the series right out of the gate.

There will be a portion of readers that will love this overly detailed approach. They will lap up the needless alien political drama of three races living on one giant city/planet. There will be an audience that will try to memorize all of the alien history and overly complicated names.

When Jemison gets lost in her own mythology the comic drags, the comic becomes choppy and confusing and in the end uninteresting. But when Jemison can get out of her own way and let Jo take center stage in an intergalactic cop drama… now you’ve got something that is going to keep me reading. I could care less about the politics and intricate diversity of a stuffy council and how politics affects the world around Jo. I get enough of that every day in this overly-politically hyped world outside my own window. I would much rather escape to a story of a good cop learning the ropes of protecting her planet, one murder case at a time. Maybe that’s my own need for escapism coming through, but I’m betting that I am not the only one who will feel this way about this series.

Lantern Mullein is a likable character. She’s a rookie out of her league, but still in charge and when you’re patrolling a city/planet that hasn’t had a murder in 500 years all eyes are on her as a string of dead bodies pop up. As I stated before the murder mystery is where this comic excels and it’s too bad that this plot point is relegated to the background in favor of world-building. The idea of Jo helping an alien culture learn about forensics and the justice system is a take on Sci-Fi that I can’t remember seeing before.

The real star of this is Campbell. This artwork is career-making and I feel that this is just the beginning for a very long and celebrated stint in comics; likely fans will look back at this work as the start of his run at the top of the industry and it will inspire others to mimic this style.

While the story spits and sputters through the first issue; I’m unsure if it will find it’s rhythm as it progresses. The artwork will capture a lot of fan attention and it might be enough to boost sales, but in the long run I’m going to have to wait and see if this maxiseries can deliver the goods.