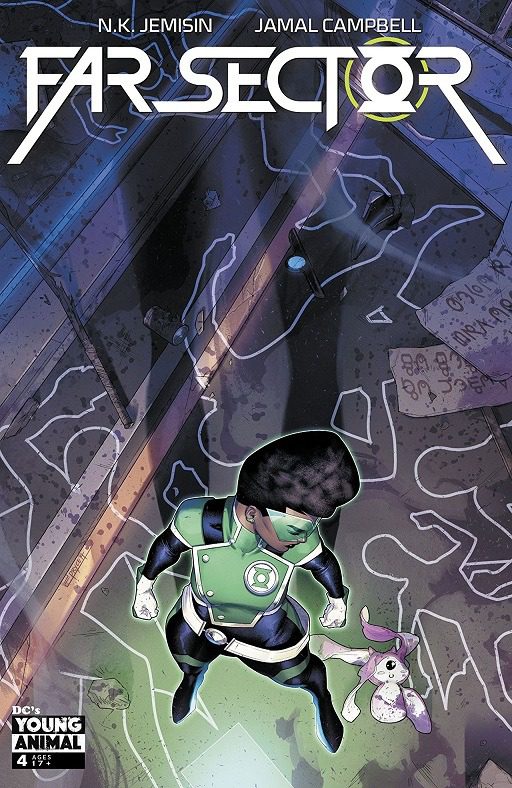 Emotions. They are a bad thing to mess with. Good or bad, we need them and to be shut off from them leads to dark and troublesome paths. That seems to be the argument being made in Far Sector #4. Considering if emotions are fully expressed, a lot of deaths will occur. Lantern Mullein is facing this conundrum, as emotions can be very liberating or dangerous.

Including this issue, Far Sector has debated upon the idea of being able to control one’s emotions. Considering that willpower is a Green Lanterns ability, it’s a unique perspective for Lantern Mullein to be involved in. This issue has moved away from the murder plot and has started to focus on the drug “Switch Off”, which temporarily disables the emotion, “Exploit.” The struggle of this debate isn’t solely on the citizens of City Enduring but the council as well.

Jemisin has been balancing and presenting both sides of an argument and letting Lantern Mullein figure it out for herself. By giving these choices, it allows for a natural organic experience and be able to come to her own conclusions. This is hard to find in most comics, as the main writers tends to inject their own voice too often, into how the character should act. Having this type of writing helps push both sides equally which makes the story in this issue compelling.

The art and color have a classic space and other worldly look and feel. Giving the main theme of Far Sector is emotions, the range that Campbell is able to express shows true depth on the importance and understanding of them. Not often is the artist also doing colors but by taking on these tasks, it has allowed the artist to keep the feel consistent and match what is trying to be portrayed.

Far Sector #4 has continued pushing the emotional spectrum in many ways. Jemisin and Campbell work well in delivering a debate of emotions. Using a Lantern to help navigate this story is unique as the Corps are rooted in the need of emotions. The issue does get a little preachy on citizens’ rights and free choice but that’s the overall point of this book.