The following review contains strong language and opinions on the topics of rape and sexual assault. These views are mine and do not reflect the views or opinions of this website or its partners. If you are easily offended or sensitive to these issues please do not read the following review.

I’ve been on hiatus since October dealing with some personal medical issues, thankfully everything turned out alright and after a surgery on my throat, a short recovery, and then another minor procedure; I was ready to come back to Geeks Worldwide better than ever before. Upon my return, I thought that I would take it slow with my first review and tackle a title that I thought would just be some simple fun.

Just a few pages into this title and I was quoting that famous line from Arrested Development, “I’ve made a terrible mistake”.

What I thought would be a fun little comic filled with Jack Kirby’s favorite femme fatales from Apokolips turned into a modern comic book nightmare. I wasted more time thinking about how to handle this review than any title I’ve tackled before. I wanted to do the issue justice and not just blast DC, I wanted to be even-handed in my criticism, yet let readers and creators know just how badly this title was handled.

I feel like this review is going to be walking a tightrope and no matter how I tackle this comic there is going to be a section of the audience that is going to feel that I didn’t handle this topic or the comic all that well. So, already knowing that I’m destined to take a shellacking regardless of what approach I take, I’m just going to untie my reviewer gloves and just set them down over here…

…tape up my knuckles…

…and let’s get to the reviewing of this beast.

Here is what DC printed on their website in summary of this issue’s release:

The Female Furies have a terrible secret that could get them all banished to the deepest pit of Apokolips. They thought they got away with killing Steppenwolf’s nephew, but now that he’s been reported missing, the Protectors are sticking their noses into everyone’s business in hopes of finding their lost comrade. Meanwhile, Aurelie’s tormentor, Protector Willik, applies more pressure on her. Does he know more than he lets on? Regardless, it’s affecting Aurelie’s ability to lead the Furies, causing friction between her and Big Barda and forcing Granny Goodness to take drastic action.

This is what DC printed as the sales pitch for this comic. While there is some truth to it, this summary is FLAMING HORSESHIT! It does not touch on a HUGE plot point… A DC CHARACTER IS REPEATEDLY RAPED, TELLS EVERYONE AND NO ONE GIVES A SHIT!!!

The short version of what this comic is about-

The Furies are all pissed at Aurelie for her recent weakness in the role of the Furies leader. Aurelie protests that she is unable to lead because of her recent sexual assaults at the hands of Willick, a high ranking political figure on Apokolips, the team ignores Aurelie’s allegations, ignores her depression and PTSD, victim shames her, and turns a blind eye to Aurelie’s fate as she is condemned to train with the very man that has repeatedly raped her.

That’s the short version. That’s the best I could do. I wrestled with how to even proceed with this review. This issue is the most difficult I have had to write about in my four years of writing reviews.

On one hand, I understand what Cecil Castellucci was aiming for in this issue. She is not the first writer in history to use sexual abuse or assault as a plot device, nor will he be the last. I understand that this story has elements of victim shaming that ring true-to-life for thousands of abuse victims; that even when they come forward with their personal accounts they can often times be called liars and go through life not being believed. I understand this. I see where Castellucci is trying to aim with this story.

That is not what we got. Instead, this issue hits with all the subtlety of a flaming Mack truck carrying a load of barb-wired wrapped sledgehammers. This comic aimed to tell a very serious story about a very serious topic and it didn’t even land in the same area code when it came to execution. There is so much here to unpack that I’m not sure if I have the energy to wade into the impending debate that is surely going to give DC comics hell when this title is released to the general public today.

Start with the cover. 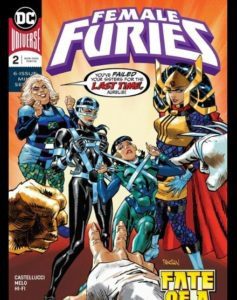 Once you have read the story and you go back and look at the cover of this comic it is appalling that DC went with this image. Aurelie is bound, on her knees, surrounded by the other Furies who point and mock her, as Granny Goodness says, “You’ve failed your sisters for the last time Aurelie!” What is Aurelie’s crime? In the pages of the comic the other Furies are angry and upset that Aurelie was “weak” and got raped… not only that but that Aurelie’s other sin was to complain about getting raped. As Granny Goodness says towards the end of the issue, “You will suck it up as I and every woman on Apokolips have done for years before you.”

There is a panel, just after that line by Granny, that encapsulates the gross miscalculation of the writer by showing this exchange of the other Furies where these women go so far beyond victim shaming that it is absurd. 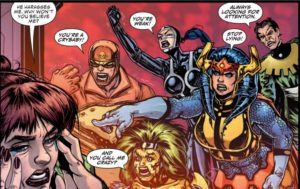 The simple fact that DC allowed this plotline to take place is stunning. I’m not shocked that the company would breach this topic, but I’m dumbfounded that DC would let this topic be handled so poorly. Because not only are readers subjected to the implied sexual abuse and assault of Aurelie, but then the writer goes even further down the avenue of bad taste to have Aurelie get pregnant from her attacker.

But don’t worry, she doesn’t keep the rape-baby, no Granny Goodness removes the fetus and uses it to perform some weird experiment and turn it into a hideous monster. So whoopee! I’m not even going to touch the issue of abortion in this review; I think we have enough adult content to deal with as is.

There are multiple instances where Aurelie tries to confront her other teammates about her assault. Big Barda, who has become a very popular character in recent years, comes off as a careless bully when Aurelie tells her flat out that Willick is raping her. Barda’s response is “He’s never done that we with me. You’re making it up.” And then kicks a chair and screams, “Stop lying about Willick to cover up your failings as a Fury.”

It’s this tone-deaf approach to the entire issue that only magnifies the writer’s lack of awareness. Again, I can see what Castellucci was aiming for, but the execution is lacking. I could even look the other way if this was a side-plot that got away from the writer, but this is the entire issue! From start to finish readers are exposed to a group of characters that are unlikable assholes, with the only trait of the issue being that each new character that enters the comic tries to out-asshole the last character in how unlikable they are.

In the end, we are left with a story about a cast that we care nothing for. There is no investment as a reader into seeing this mini-series to completion. In fact, I was relieved when I reached the end of this issue because I knew that I’ll never pick up another installment, and I could go take a shower to wash the creepiness off of me.

As for the other elements of this comic, which got pushed to the wayside in the wake of the narrative; the artwork was serviceable if a little rough in places. There were panels where the anatomy of characters was off in proportion, but all-in-all the art was fine. I took no issue with Adriana Melo’s work here. The color and letters were what you would expect from a professional-level title. I just feel bad that this creative team got mired down with this issue. These are talented folks that could be better utilized elsewhere in the DC universe.

Finally, I want to make it clear that there is little that can be done to save this series. This is a massive wound to the Female Furies as a group, and this stain will last well into the future. There is no way that Castellucci can undo what has been done. Even if the character of Willik is killed off in the most painful way imaginable, it will not erase this mistake.

I wish that editor Jamie S. Rich had done the right thing when this script came across his desk and just tossed it in the nearest wastebasket, went out and bought some lighter fluid and some matches and then taken that flaming wastebasket to the nearest dumpster and let it all burn to the ground.

That might seem overly harsh. But here is the kicker folks; I’m a survivor of childhood sexual abuse. I am a survivor of rape. It’s not something that I throw on my cover letter to my resume, but it’s a part of me. I can read and enjoy entertainment that deals with these heavy topics, it’s not a “no fly zone” for me, but I’ll call bullshit when I see someone tip-toeing into a topic they obviously have no idea what they are talking about when it comes across my path.

I know that it is only March, it’s still early in the year, but I’m going to safely say that this issue has secured its spot as one of the worst of 2019. This comic will cause a lot of debate over the next few weeks and for all the wrong reasons. Like I said earlier, I feel sorry for the creators that got dragged into this mess, they and the fans deserve better.