So this is what director McG has been up to. As another great reason for the season, Netflix has been dealing out a plethora of spooky spirited content just in time for Halloween and with Stranger Things season 2 just around the corner. Their latest and greatest in the grotesque release The Babysitter is here to hold us off until that glorious day.

In a time of repetitive horror movie term oil, The Babysitter takes its predecessor’s tropes with a hilarious grain of salt and amps up the themes of a horror romp comp up to 11. Filled with fresh faces old and new the stories centers around a struggling teenager named Cole (Judah Lewis) who is seemingly misunderstood by his constantly travelling parents and frequently picked on by the local bullies in school.

His saving grace seeming to be his babysitter Bee ( Samara Weaving ) saving him time and time again from his tormentors giving him an escape from the problems and stress of his life. Bee seems to be the ideal babysitter perfect in every way right?

Cole finds out the hard way that beauty comes with a price. When he decides to take a dare staying up to sneak a peek at just what the babysitter does after bedtime. Stumbling upon a Satanic sacrifice ritual happening in his living room Cole must now deal with Bee and her four psychotic friends before he’s next on the chopping block. 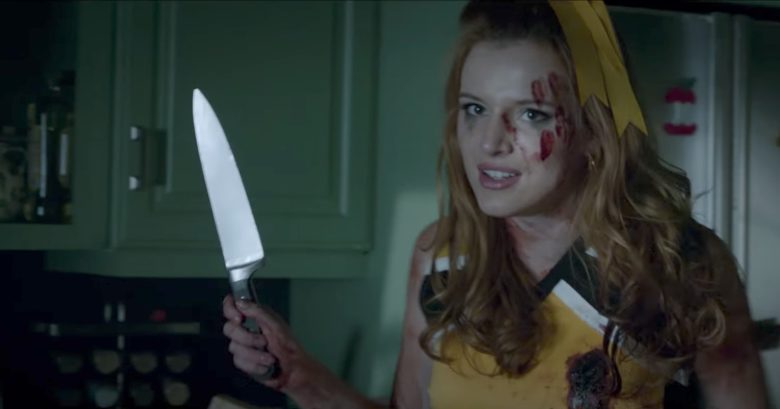 Brimming with chaotic black humor The Babysitter switches from a slasher film to Home Alone from hell at every hilarious opportunity it gets. Letting each of the 5 deranged teenagers have their swing at Cole granting each of the occult Breakfast Club a time to shine.

The Babysitter on many levels is a fucked up coming of age story that I thoroughly enjoyed. I give The Babysitter a solid 8 out 10. For giving me something that manages to be the right amount of cheesy that entertains in a movie while also setting enough context and character development to be fulfilling without accessive questioning about what I just watched after. Stay posted to Omega Underground for more reviews and horror news.