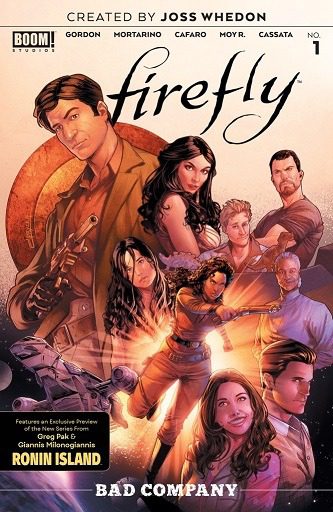 Out of all the stories in the ‘verse this one is about Mal Reynolds ex-old lady Saffron. The character was once played by the uber-sexy Christina Hendricks in the short-lived T.V. series.  Saffron is the mysterious femme fatale with no past, no name, and no qualms about taking what she wants.

This latest mini-series from BOOM! hopes to shed some light on the backstory of the former Mrs. Reynolds. In this opening issue, we learn that Saffron grew up as a street smart pickpocket, who stole to survive and provide for her ailing father who suffers from the pox. Along the way, she learns the arts of the Companions, runs afoul of the law, and leaves the Alliance eating her dust in a jailbreak.

But there is a line towards the end of the issue, during Saffron’s interrogation that puts this entire backstory into question, leaving the reader to wonder if what she shared was a rare glimpse into the character’s real backstory, or was it all made-up hoopla to allow her to get close enough to her captor to make a grand escape.

It’s this tricky bit of storytelling at the end by Gordon that gives this comic a little extra zing, in what otherwise was pretty standard fare. Sure, there is still an interest in the Firefly franchise, but now 16 years after the show was canceled is there really enough fan backing to justify a solo comic based on a side character? And don’t get the wrong idea here; the rest of the Firefly cast is not in the pages of this comic. The only mention we get of Mal and Zoe are in passing.  It’s heresy to question the validity of the franchise in hardcore Firefly circles, but the question remains.

The artwork in this issue is at times wonderful and at other times bland. There are a few pages where Mortarino really pushes the art and it shows, while the bulk of the story is basic page layouts with no imagination shown. The latter half of the issue stands out and has a much cleaner look to it.

Have you seen this:
Seven Secrets # 2 (REVIEW)

While I’m still not sold on the idea of a mini-series about Saffron I’m sure there is a contingent of the Firefly community that is breathlessly waiting for answers to this character’s mysterious background. The rest of the comic world will let this comic pass largely unnoticed.