With filming complete on DC’s ‘Swamp Thing’, series star Henderson Wade has shared the first photo of himself as Matt Cable. 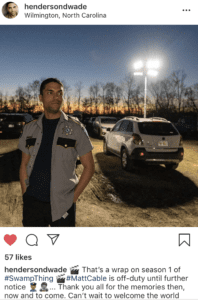 The caption reads “That’s a wrap on season 1 of #Swamp Thing. #MattCable is off-duty until further notice… Thank you all for the memories then, now and to come… Can’t wait to welcome the world into our swamp family #May31 only on #DCUniverse!”

In the comics, Cable was a government agent assigned to protect Alec Holland and his wife, which kicked off the winding history of Cable’s character in DC Comics lore. ‘Swamp Thing’ will see Cable as “a Louisiana lawman who finds himself in dire straits when supernatural evil threatens the town he’s sworn to protect.”

Wade is best known for his role as Sheriff Michael Minetta on ‘Riverdale.’

‘Swamp Thing’ hails from Gary Dauberman and Mark Verheiden and stars Crystal Reed, Alec Bean, and Derek Mears. It will premiere on May 31st, exclusively on DC Universe.