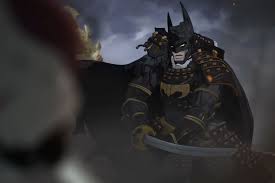 The first teaser for Batman Ninja was released and it is a beautifully lavish take on the Batman mythos. The story was written by Kauki Nakashima (Kill La Kill) and the characters were designed by Takashi Okazaki (Afro Samurai). The first footage shows some epic battle scenes between a Batman transported through time and the Joker.

Take a look at the footage and tell me what you think.

Batman Ninja will be released on Blu-Ray and DVD sometime in 2018.