‘First Man‘, the story of Neil Armstrong’s path to being the first man to walk on the moon (based on the book by James R. Hansen), comes to theaters this weekend. Ryan Gosling plays Neil Armstrong and Claire Foy portrays his wife Janet. The film covers key points and pivotal moments for Armstrong and his surrounding friends, family and colleagues including Corey Stoll as Buzz Aldrin, Lukas Haas as Michael Collins (the other two crew members of the Apollo 11), Kyle Chandler as Deke Slayton, Pablo Schreiber as Jim Lovell (who would go on to command the Apollo 13 mission), Ciarán Hinds as Gene Kranz, Jason Clarke as Edward White, Shea Whigham as Gus Grissom and so many more. Obviously many of these characters also appeared in Ron Howard‘s ‘Apollo 13′ film but rather than dealing with the aspects of the space mission itself, this movie focuses squarely on Neil Armstrong‘s personal life and then culminates with his famous Apollo 11 moon landing. 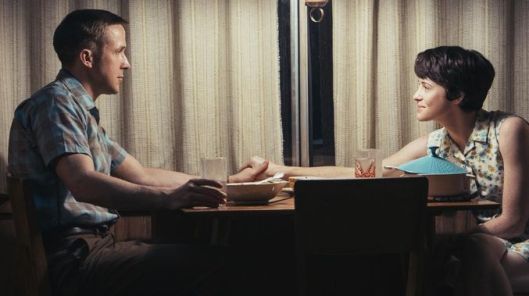 While there is plenty of drama to be had, there is also plenty of aeronautical action to suit nearly everyone. Director Damien Chazelle does an excellent job of clearly maintaining a great eye for detail throughout the process both from the perspective of being a strong period piece and in capturing all the complexities of the technical side of several NASA missions. The entire cast is excellent with Claire Foy giving a standout performance. The score by Justin Hurwitz is never overpowering but always present adding just the right musical elements when and where needed. What I thought would be a slow film was actually quite dynamic with only a few places where I would have liked to have seen things press on a bit more. While biopics are not always for everyone, I found this to be a great glimpse into the life of an American hero and a time in our history where the world watched with wonder as we raced to the stars. On a scale of 1 to 10, I’d give ‘First Man’ a space-faring 7. I also would recommend that this would be a film worth seeing in IMAX if you’re able to do so.