The Flash
The CW

Tick tock, tick tock, even the fastest man alive will always fall victim to the clock. Our pre-finale episode centers around the last 24 hours before the ominous moment where Savitar murders Iris. The lighting, score, and camera angles during the opening sections do a tremendous job to set the heavy solemn tone hovering over Team Flash during this episode. We see Flash’s last act of desperation in attempts to power the weapon meant to trap Savitar. Meanwhile, the team takes efforts to remove Iris from Savitar’s grasp outside of Barry’s knowledge. As the minute hand clicks down closer to that fatal moment; we begin to see scenes from Barry’s vision of the future take place, culminating in Barry Allen’s most heartbreaking moment since the death of his parents. 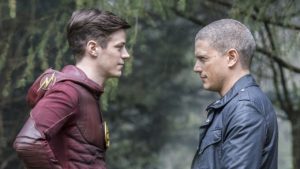 In addition to the dark solemn nature of the episode, there is an air of urgency and desperation very prevalent in the team. The obvious objective is to stop Savitar, prevent him from murdering Iris, and trap him in the Speed Force again. We have HR and (sometime in the future)-Dr Brand working aggressively on the Speed Force Bazooka, fighting through frustration and time restraints with copious amounts of caffeine and a budding, although as peculiar as the two characters, attraction. Discovering that ARGUS has a Dominator power source, which would produce the energy supply needed to power the Bazooka, Barry travels back in time, (creating who knows what yet to be seen ripples), to convince Captain Cold to help him break into ARGUS after Lyla refuses to give the power supply to Barry. Continuing with the desperate times call for desperate measures motif;  Wally and Joe take Iris to Harrison Wells’ lab on Earth-2 without Barry’s knowledge, in effort to keep her out of Savitar’s reach. As the episode progresses, despite apparent successes, we notice one common result of the desperate attempts by our team to change the future in the last seconds; failure. 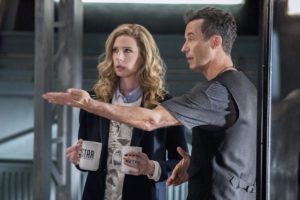 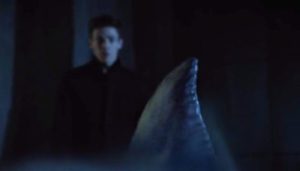 The Odd Couple Bank Heist routine with Snart and Allen, while lagging a bit, contains some great highlights of the episode. We see Barry using HR’s holographic disguise to pose as Lyla to get into ARGUS. Snart and Allen’s banter is well played and the two characters bounce off of each other quite well. We get to see King Shark, as well as learn of Captain Cold’s love of Shark Week. The plan fails miserably, as Snart predicts, Allen sacrifices his own skin and the possibility of stealing the power source in order to save Snart from becoming Shark food. The quip from Snart of putting in a good work for Cisco with his sister if he got him out of Killer Shark’s cage was gold. Ultimately, Lyla decides she couldn’t live with preventing the possibility of saving Iris and gives Barry the power source, making the entire middle section of the episode a moot point; thank goodness it was at least well acted, written, and saved itself from dragging down the episode with a lagging second act that had zero necessity. 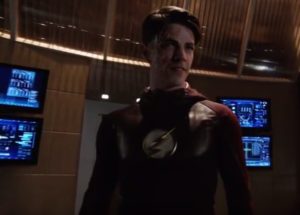 While Barry is on his Ocean’s 11-esq mission with one of his arch rivals, Joe and Wally take Iris to Earth-2, outside of Barry’s knowledge, in attempts to take her out of Savitar’s reach. While it was great to see Cavanagh play two personalities again this episode, I think taking Iris to Earth-2, even if that’s not what you told Barry, is a pretty apparent move. I think Earth-3 where Jesse is speeding around in OG Flash’s place, or onto Gorilla Grodd Planet of the Apes Earth, or hanging out with Gypsy on her Earth, would’ve been a better stretch. If I were Savitar, fueled with all of Barry Allen’s memories and thought processes; I feel like the first place I would check, after zipping all around Central City, would be Earth-2, but I digress; Cavanagh made it worth it, so no harm no foul. That is, until HR, super stoked at the news that they have the power source to complete the Speed Force Bazooka, reveals Iris’ location to Barry Allen, only for the ominous reveal that Savitar is just wearing a Flash suit! Dun dun dunnnnnn! HR is furious with himself for opening his ‘big stupid mouth’, as Savitar speeds into Earth-2, throws Wells and Joe around, snaps Wally’s leg, and steals Iris. The whole scene, although a little telegraphed, played immensely well on screen, especially with the remorse that HR felt for the slip and Cisco trying to console him. 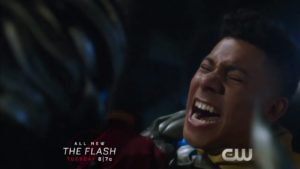 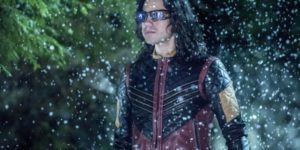 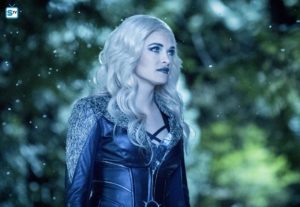 Now we arrive at the meat and potatoes of the episode, Act 3, Boss Fight! Giving into the calling cards and the glimpses of visions he’s had, Cisco prepares to battle his best friend. The images we see of the Killer Frost/Vibe battle are of epic proportions, as the two are both immensely strong Meta’s. One is fueled by a desire to see Savitar’s plan come to fruition and free herself of the emotional anguish she’s burying in a tomb of ice; the other fueled by the immense love and the pain of betrayal he feels for his best friend. Elsewhere, on Infantino Street, we are exposed to a scene we’ve seen glimpses of all season. 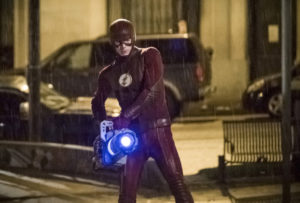 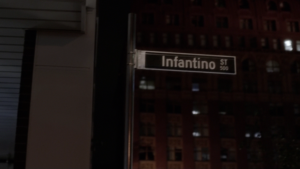 Savitar, holding Iris and facing off with The Flash. As the Flash unleashes the Speed Force Bazooka, his hopes are crushed as it’s revealed that when Barry threw the Philosopher Stone into the future, bringing him to this moment in the first place, he inadvertently bestowed it to Savitar. This action not only freed him from the Speed Force Prison but also made him impervious to the impact of the Speed Force Bazooka again. Gustin’s face, the realization of the full circle impact of Flashpoint resonating in his mind, is so tragic it’s phenomenal. As Savitar plunges his spike into Iris’ back, bringing the vision of the future to fruition, our heart strings are tugged at even harder with the flashback to the beginning of the episode, where Iris leaves a video message on her phone for Barry, professing her vows of marriage to him. Wow, just wow, the layering of this scene, the music, the volume of everything, the camera angles, the cuts to expressions, the entirety of it as a whole is one of the most painful, but beautiful things I have seen from any show all season. 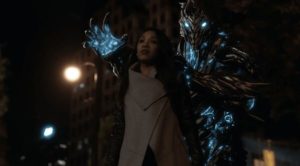 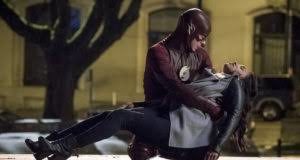 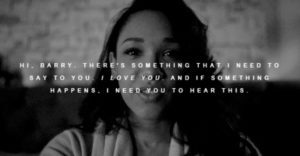 So Savitar has won, Iris is dead….right? There were some subtle hints throughout the episode that make you scratch your chin and wonder.

Theory one: The hardest to swallow, Iris is really dead. No tag backs, do not pass go, do not collect $200, finito, dead. While this would be as powerful as it would be tragic, this would frankly be the most effective angle to play. Actually, kill a main character, show the consequences that even one of the most powerful Metahumans can’t avoid, really drive home the threat Savitar is, it would be horrible but such a brazen move for a comic book show. I haven’t heard of Candice Patton working on anything else, so I don’t think this is the case.

Theory two: HR sacrifices himself. Driven by the want to redeem himself and prove his worth and merit to Team Flash, HR trades places with Iris (with or without the team’s knowledge) and disguises himself using his holographic disguise pen. The HR we see that blabs is actually a hologram from the Star Labs tour set up, meanwhile, Iris is hidden in the vault room where the news articles from the future are shown. This would be a startling reveal, especially if the team didn’t know it was happening, it would shock Savitar, and give a chance for a sporadic battle to kick off the finale episode. Also, beautiful move from HR showing his love for the team.

Theory three: Savitar kills an Iris pulled from somewhere else in time. Similar to the HR switch, if Barry is already running through time and messing up who knows what, maybe he bounced into a time, or alternate universe, or something, and grabs a disposable Iris, and switches out for Savitar. Would be a hard sell considering then by the rules of engagement, Savitar should have a memory of it, but a third theory wild card was necessary. What do you think happened in relation to the fate of Iris West at the hands of Savitar? Weigh in as we speed into the season finale of the Flash. Until then #keepitnerdy .