We’ve reached Night 2 and Part 3 of the biggest and arguably most successful DCTV Crossover Event. This crossover is raising the bar not just for the television show experience, but catapulting the Super Flarrowverse of Tomorrow into true competition with their big screen counter parts! The stakes for our heroes have never been higher; Supergirl is on Earth-1 being exposed to the Prism’s Red Sunlight, weakening her for the heart transplant to Overgirl. Cisco, Wells, Mick, Dinah, Caitlin, Curtis, and Rene are stuck in the Particle Accelerator Prison, leaving Felicity and Iris attempting to rescue the heroes. On Earth-X the rest of our heroes; Oliver, Barry, Sara, Alex, Stein and Jax, awaken corralled with more of the Nazi’s prisoners, including a young man who was deemed guilty of ‘loving the wrong person’. Quentin Lance’s Earth-X doppelgänger, the Sturmbannfuhrer and the Dark Arrow’s ‘Major’, enters and as he looks at Sara he curtly explains how he killed his earth’s Sara for her same sexual compulsions. He demands our heroes and the young man they had spoken to earlier to be rounded up, and taken towards the firing squad. After an escape attempt is thwarted by the shock feature in their power inhibiting collars; our heroes stand glaring down Lance-X and his extermination squad, when at the last second Earth-X’s Leonard, (though here his friends call him Leo), Snart wearing his classic Citizen Cold garb freeze blasts the Nazi guns, and takes down a gun turret. Chaos ensues allowing Snart the time to grab a set of keys to free our heroes, and the previously unidentified young man. We discover this man is The Ray who is originally from Earth-1, and also Leo Snart’s boyfriend. 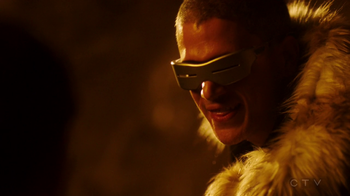 As The Ray flies into the air and is engulfed by glowing light, raining down blasts of energy onto the Nazis, our heroes escape back to the Freedom Fighter base which is run by Earth-X’s Winn Schott. Our team intends to use the breach pathway that the Reich captured from the Freedom Fighter’s at the beginning of Episode 1 in order to return home. But, General Schott-X is dead set on using a powerful weapon to destroy the breach, effectively marooning our heroes on Earth-X in the process. After a heartfelt attempt by Alex to appeal to the relationship her earth’s Winn has with Kara fails; Leo convinces Ray to speak with Winn-X granting our heroes one hour to infiltrate and secure the base and take the breach back to Earth-1. With Barry’s speed recon revealing power dampeners all throughout the base; Oliver comes up with a plan to gain access. Dressing in Reich garb, Oliver uses his doppelganger’s position on Earth-X to allow him and Leo to enter the base, but playing the part has consequences. Oliver has to allow the Earth- X WaveRider to pass through the breach positioning above Earth-1. 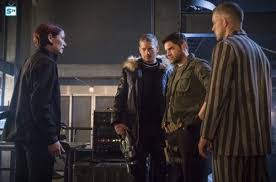 Back on Earth-1, Felicity and Iris are unable to open the cells in the Particle Accelerator Prison and have to find alternate means to save Kara. Meanwhile, Overgirl is pedantically preaching to Kara in regards to her squandering her god-like status by protecting humans. This is a very fun scene to watch allowing Melissa Benoist to play even eviler than her Red Kryptonite episode. Just as Wells/Thawne is preparing to saw through Kara’s chest, with just moments to spare, Felicity is able to cut the power to STAR Labs, and send out an SOS to the Legends on the Wave Rider. Dark Arrow and Thawne search the premises for Felicity and Iris, but the girls manage to sneak Kara out of her restraints, and the presence of the Red Prism. Making a break for the elevator; Metallo-X attacks them blasting Kara into the next room as Dark Arrow apprehends Felicity and Iris. Thawne, unable to restore power due to Felicity’s encryption, threatens to phase his hand into her chest and end her life. Kara makes her way back into the room, pleading with Thawne to spare Felicity, unwilling to let anyone die for her. She then begs Felicity to give them the code and reluctantly returns back for the procedure. 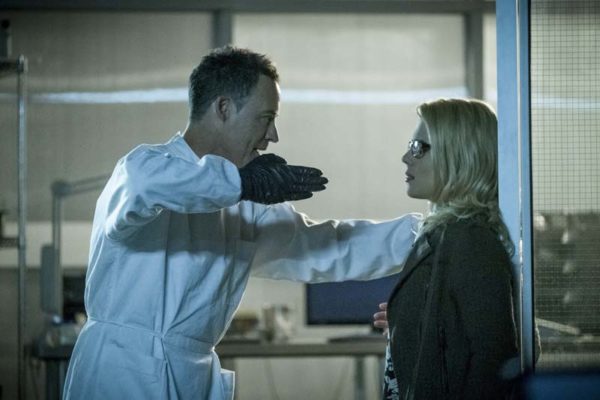 After Green Arrow is discovered to not be the Dark Arrow on Earth-X when he attempts to shoot Sturmbannfuhrer instead of Earth-X’s Felicity Smoak; a warzone unleashes. Citizen Cold, Arrow, Firestorm, Sara, and Alex mount an offensive on the base. Simultaneously, The Ray and Flash are trying to stop the weapon General Schott unleashed on the base far ahead of schedule, the Red Tornado (which looks phenomenal compared to its original appearance on Supergirl). As our heroes fight towards the breach portal, Stein suggests he and Jax separate so Jax can hotwire the portal, and Stein can pull the lever to activate it. Jax manages the hot wire but gets pinned down by gunfire, with the rest of our heroes stuck in battle or pinned behind pillars avoiding gunfire, Stein makes a desperate break for the lever. Despite’s Jax’s screams of protest, Martin continues to run, with less than ten feet to go a Reich soldier notices his attempt and opens fire, dropping one half of Firestorm to the ground. As a pool of blood begins to form around Grey, we are brought to the close of Part 3, and the audience is in an absolute emotional uproar.

Part 3 of our epic crossover event continues the intensity, the emotion, the excitement, and the unbelievable experience for fans! The introduction of The Ray, the return of Snart and the Red Tornado, the heroic efforts of Felicity and Iris, the amazing doppelganger performances for Schott and Quentin Lance; at every turn Crisis on Earth-X continues to exceed all possible expectations. As a result, this adventure is propelled to the forefront of live action superhero events. For example, the heartwarming conversation between Sara and Alex adds even more intricate layers to the characters, seeing the touching relationship between The Ray and Citizen Cold was not only expertly portrayed, but resonated even more as a beacon of love and hope on a literal world comprised of hate and oppression. The performances by Tom Cavanagh, Stephen Amell, and Melissa Benoist, portraying multiple versions of themselves, both good and evil have been nothing short of incredible throughout the entire crossover. How will this other worldly, no, multiple worldly incredible experiences end? Will Stein survive? Can our heroes escape Earth-X? What is the fate of our heroes residing on Earth-1, especially Kara? Will Overgirl succeed in getting her heart? All this and more will be answered as we enter the home stretch of the greatest DCTV event yet.

Until then, keep it nerdy!