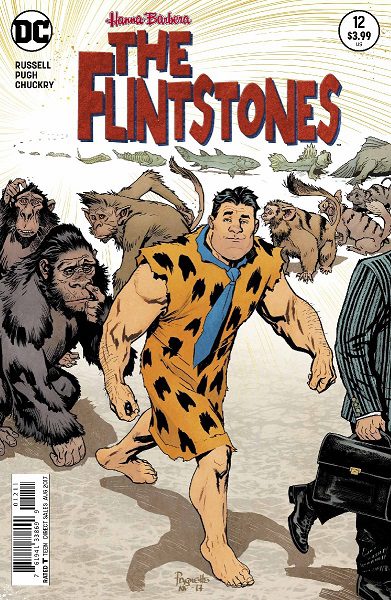 Thank you, Mark Russell. Thank you for creating a socially relevant comic. Over the course of twelve issues, The Flintstones held a mirror up to consumerism, racism, politics, religion, and a number of other issues facing humanity. Issue #12 strikes a balance between a wrap-up reflection of the past twelve issues and new character growth that creates an excellent finale.

Russell’s Flintstones is a cautionary critique of American society in the mid 2010s, but it also holds up as a socially relevant critique on humanity across the decades. Russell’s humanity is frequently selfish, greedy, judgmental, and aggressive, but it is also caring, compassionate, expressive, and loving. In Russell’s society, negative traits are exemplified by those in positions of perceived power – the business owner, the politician, the religious leader, and the social elite. Russell most redeeming characters come in the form of the working class Fred, the artistic Wilma, the questioning Pebbles, and the animal servants and appliances. The supportive relationship between a bowling ball and a vacuum during oppression remains a high point for the series.

READ THIS
Batman Beyond #40 (REVIEW)

Each of these critical and redemptive characters is provided time during this final issue. Russell walks a fine line between a traditional wrap-up plot that touches on issues of previous issues and a new narrative around a bowling championship. At first, the bowling plot distracts from Russell’s concluding remarks, but ultimately the bowling plot creates opportunities for characters to show growth and provide hope. 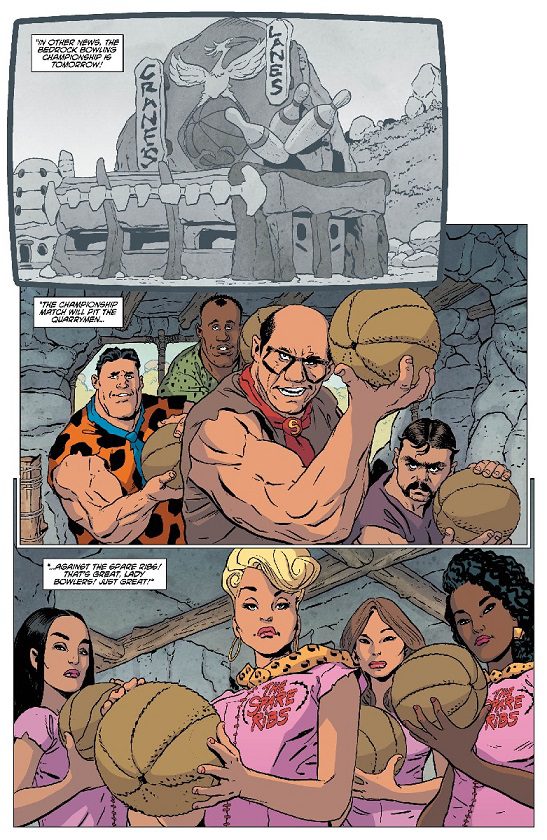 Hope is the common thread for this issue and Russell’s series. While there are plenty of damning realities facing the world of the Flintstones, and the modern world, Russell provides readers with hope for change. The hope is not through those in positions of power, but the hope is in the individual. Russell’s final issue makes the case that even those in positions of power can change as individuals.

The Flintstones #12 does not struggle under the weight of the final issue. It is not heavy-handed, but it does not pull punches. The world Russell reflects through Bedrock needs work, but it is not beyond hope. This final issue provides readers with plenty to think about but also a call to action.

Mark Russell’s The Flinstones was one of the most important and relevant titles to come out of a major comics publisher over this past year. The final issue is an excellent stand alone criticism and a concluding chapter to his social commentary. Thank you, Mr. Russell, for challenging us all as comic readers, as citizens, and as members of humanity.