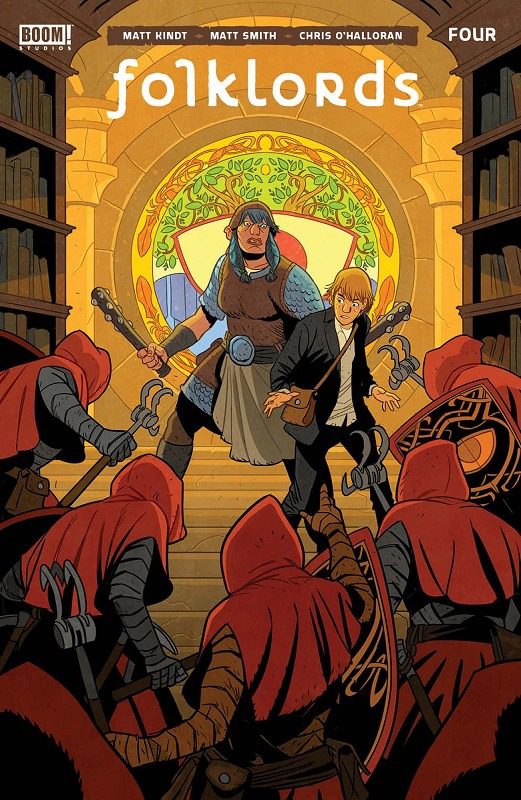 I might not be reviewing this book if not for my weakness for words. To be more specific I enjoy wordplay, whether it be puns or double entendre. So a comic titled Folklords had to hold something to humor and entertain me I thought.

I was certainly correct.

First as the title suggests Folklords is best described as an examination of the two words that create it. It is a story of the tales and those who tell them. Can you trust one if you can’t the other.

Folklords #4 slows the tales progression enough from the last two issues to take the spotlight off of main character Ansel and place it on his companion. ‘Ugly’ as she has come to be known had read the stories. A kiss would change her appearance and so that became her pursuit. It wasn’t until realizing the lie being told that she began to accept her existence.

Additionally, this issue introduces a mysterious librarian named Sal. His presence in the story serves two purposes. He helps progress the action in the issue, helping Ansel and Ugly move secretly into the Library. Secondly, he further emphasizes the theme of refusing the lies being told by turning and working against the other librarians.

The concept of this comic is creative, imaginative and humorous. The use of “the kiss” in this issue seem to indicate that Matt Kindt is versed in fairy tale lore. A character that is okay being called Ugly and librarians marching along while “shhshing” everyone suggest a light hearted read but this title is so much more.

The search for and completion of a quest is the goal of Ansel in the pages of Folklords. Issue #4 explores those who aid the hero on their quest. Are they abandoning their own quest or is this the beginning of it?