FOZZY Prepares To Embark On “Judas Rising” Tour In The U.S.

Veteran Hard Rock outfit FOZZY will make their highly awaited return to the road in the United States with the announcement of the band’s “Judas Rising“ tour. Led by their infamously charismatic frontman (and WWE Legend) Chris Jericho, Fozzy are prepared to rock fans worldwide with a live show that will offer the first taste of new material since the release of their last full length record, “Do You Wanna Start A War“ (2014). Joining Fozzy on these dates will be Kyng & Sons of Texas.

Speaking about the band’s upcoming dates, Fozzy lead singer Chris Jericho expressed his enthusiasm for their first tour in over a year, stating: “I’m so excited to get back on the lighted stage w Fozzy after taking all of 2016 off! The Judas Rising Tour sees a new Fozzy with new music and a killer new stage show, but with the same energy and party vibe that we’ve been bringing to our fans since day one! Come rock with us, drink a beer and show your boobs…whether you’re a girl or a guy! Fozzy is back…don’tcha dare miss us!”

Tickets and VIP Packages for all dates on the “Judas Rising” tour can be found here.

Have you seen this:
Elvira's 40th Anniversary Special 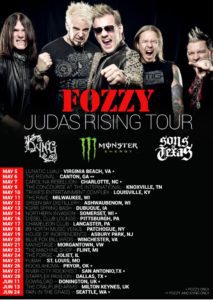