Fu Jitsu Vol. 1: The Curse of the Atomic Katana REVIEW 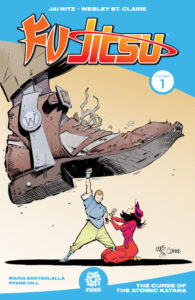 Every so often I purposely go out looking for something different to read. If you have been following my reviews, I tend towards the more “cartoon-y” end of the spectrum with a little grit sprinkled in. This time, I wanted a mix! Right from the cover, I felt that Fu Jitsu would fill that spot.  A little gritty realism in the art, with no, holds bar action.  Jai Nitz and Wesley St. Claire make for an awesome combination.

The art and the story style remind me of the old martial arts films I love to watch. There is something believable about the unrealistic feats these characters get into. It is amazing what a little kung fu and a little magical science can do. Not to mention, how he uses that toaster! But that is getting too close to spoiler territory. As per usual, I will attempt to make this review with as few (major) spoilers as possible. That being said, there are things that I cannot sit on, but my revealing them will not ruin your experience. 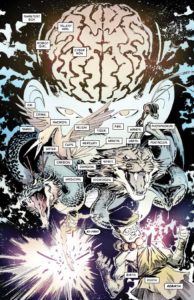 Volume 1 of Fu Jitsu is made up of the first 5 comics in this series. (Hopefully this will not be the only 5, but I will get into that later.) Fu Jitsu is the world’s smartest boy, and has been for the last hundred years. You read that right, he is an over 100-year-old teenager! Because of this, he has been able to live many lives and go on adventures that we can only dream of. Fu has met famous people from Albert Einstein and the Wright brothers to Johnny Unitas and Art Donovan. I cannot blame him for wanted to hob-nob with those kinds of people. If I had all the time of the world in my hands, I would as well. Not everybody Fu meets wants to be his friend, though. Robert Wadlow, the world’s tallest man, and his dangerous magi-science wants to rid the world of Fu Jitsu.

This ends up brin 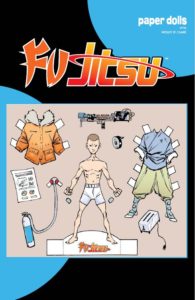 ging some very interesting philosophical questions into the light. It would be easy to call Fu Jitsu the hero of his comic, his name is on the cover and all. But to quote The Strangers from The Big Lebowski, “’cause, what’s a hero?” It is clear that both Fu and Wadlow think themselves to be the hero of the larger story, but both cannot be right. Right? Wadlow abducts Fu’s android girlfriend and declares himself emperor of Earth, these are very villain-y things to do. On the other hand, Fu likes to run from his problems (like fleeing to Antarctica after aforementioned girlfriend breaks up with him). Fu is also obsessed with power, even though he has himself convinced that it is only enlightenment he seeks.

Good thing we have this comic to straighten things out for us! Except we might not. This is why I mentioned that I hope we can see more of this awesome comic. Jai Nitz and Wesley St. Claire need our help in letting AfterShock Comics know hat we want more. So please, go buy this comic, digital or print, so that the higher-ups know that it is not only masks and tights that we want to see, but originality as well. I would like to suggest buying the print copy of this volume because in the back there are some paper dress-up dolls, and it is really difficult to cut them out of your tablet screen… trust me!