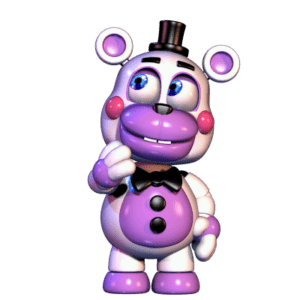 I. Love. Five Nights at Freddy’s. I have yet to play through all the games, but I have found hours of delight watching others play it and watch theory videos (I’m looking at you MatPat). So, naturally, I had to get some merchandise based on this awesome jumpscare video game series. Recently (well, not so recently anymore), Funko put out a Hot Topic exclusive medium plush. Medium? They never do medium plushies! And yet, here we are, with a medium plush of… Helpy! That cute little animated bear that helps you throughout Pizzeria Simulator.

The character itself, admittedly, doesn’t do much in the game. It’s a cute little sprite that dances while you purchase items for your newly bought Freddy Fazbear’s Pizza restaurant. It also stands as a little statue, replacing the cupcake of FNAF 1, in your office. But it’s cute, so naturally, fans fell in love, and Funko was quick to see that. 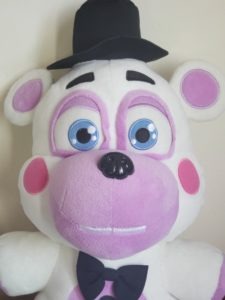 I’ve seen both dodgy and fantastic work from Funko, and here they hit the ball out of the park. This plush is amazingly detailed, and looks like the character was pulled straight from the game. From the incredibly round ears, to the tiny buck teeth, Funko nailed all the details this tiny character contained.

To be honest, I would rather have this sitting on my terminal while I try to avoid scary animatronics out to kill me. I could hug it when things got too tense! 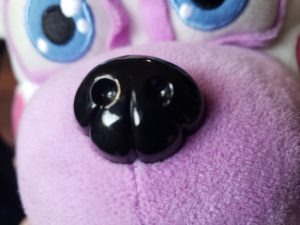 Everything is soft material on this plushie, except for the nose, which is a hard shiny plastic. This is the only detail I have an issue with. The character has a round, black nose. However, the nose on the plushie resembles one you’d find on a dog plushie, where it is a detailed animal nose, instead of the simple round ones the characters tend to have in the game. Funny enough, this isn’t the only plush to have this nose. There have been other companies who produce not-so-official Five Nights at Freddy’s merch, and they too, use this nose. Why? I’m not so sure. In game plushies have a simple black nose, and even the animatronics (who are animals and have a nose), have a simple, round, black nose. So why this detail? It doesn’t make much sense, but considering how small the detail is on the toy, it’s negligible, and doesn’t change the perfection of the rest of the figure. 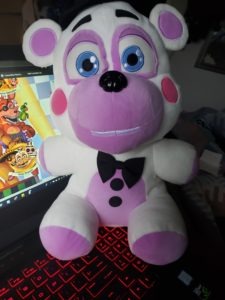 The size is perfect, in my opinion. It’s not the usual small plushies from Funko where you have to be in an incredible awkward position to try and cuddle it, and it’s not too large where you feel overwhelmed by the size. It’s an average teddy bear size, I would say, and is certainly huggable - which is very important. 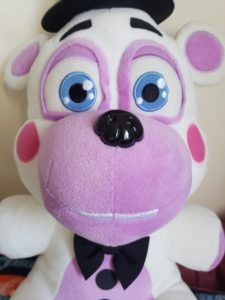 The character is based off the fun-time animatronics of the series with the pastel pink and white colors and the very round red cheeks (which is also seen on the “toy” animatronics from the second game in the franchise). The colors match it’s in-game counterpart, which seems to be a rarity for Funko. There have been times where they got the coloring way off, like with the plush version of another character from the game: Lefty. Lefty is ALL black, and yet Funko made her gray. Even the Freddy plushies have been the wrong color browns! And yet, here we have a moment where Funko got the colors right. The pastel pink is spot on, as well as the bright blue eyes. Even the round cheeks are right! The cheeks aren’t red, but a paled, bright pink. 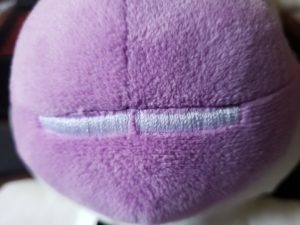 Buck teeth definitely stand out on this character, which Funko included. They appear just a tick wider than the in-game counterpart, but it isn’t distracting, it just makes the figure cuter. You would think something as small as buck teeth wouldn’t make a big difference, but this character has prominent ones. Imagine seeing SpongeBob without his signature buck teeth. It would just seem… uncomfortably odd.

The plush is very soft, and the right size for hugging and cuddling… or displaying. The design is superb, and one of the best Five Nights at Freddy’s designs that Funko has produced in plushie form. It will certainly be a prominent feature among any FNAF Funko plush collection, dwarfing the usual small plushies Funko produces for the series. If you can get your hands on this item, I recommend getting it immediately. It will certainly be sought out by collectors so if Helpy is your favorite character, get him while you can! 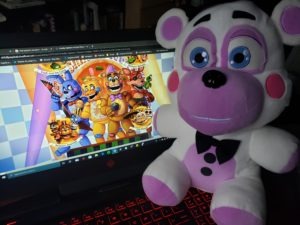 He certainly helps me when I’m on the computer!