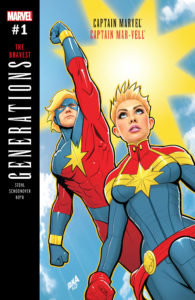 This week’s issue of Marvel Generations features the current Captain Marvel, Carol Danvers, and her original Captain Marvel, Mar-Vell. Carol suddenly finds herself on the alien planet Mydon, which is being attacked by invaders. She intervenes to defend the Mydonians, and is soon joined by Mar-Vell who’s been fighting the invaders as well. Mar-Vell reveals they are in the Negative Zone, and that Annihilus (the Silver Age Fantastic Four villain) is behind the invasion. The two Marvels team up to defend Mydon and take out Annihuls before he can cause more destruction.

Margaret Stohl has done great work with Carol Danvers in The Mighty Captain Marvel series, and she really shines in this story. But Mar-Vell, on the other hand, comes off a bit more whimsical than fans might remember. Nevertheless, the Marvels share some great moments that recall the core dynamic of their mentor/mentee relationship. Also, the use of the Negative Zone as the setting in this issue works so well to give the story some classic Captain Marvel vibes.

Brent Schoonover’s artwork on this issue is mostly solid, but it’s Jordan Boyd’s work on colors that really makes this feel like a classic Captain Marvel story. Everything from the planet Mydon to the depiction of Annihilus brings that out-of-this-world, space adventure tone, which is exactly what a big Captain Marvel story like this needs.

While fans of the original Captain Mar-Vell might not enjoy this particular portrayal, the story and the art on this issue make this a Captain Marvel story worth checking out.