This issue drops us right into an amazing fight scene. I am not just saying this because the two fighters are in their underwear. Though that honestly does not hurt anything. Baboushka is a character I had never heard of before, but am now a big fan of. She has the spy know how of a James Bond and the moves of a Black Widow. That is not to lessen her value. She is a character unto herself. Something that I personally love about 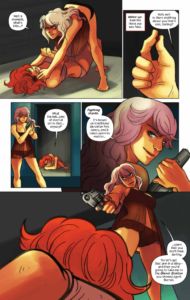 Baboushka is the fact that I know nothing about her. This means that when she ends up in dire situations, I do not know what she is going to do to get out. There is excitement and intrigue around every corner.

In issue two, Baboushka has to fight her way out of bed and find her way into a secret lair. It is no big surprise what happens next, our spy gets herself trapped. How she gets out was a shock to me, thought the comic itself points out that her savior is a cameo from Mission 1. The only thing I would have asked for is a little more information about the Ghost Stations. I understand why we are being kept in the dark, we are Baboushka. A lot of comics allow a sense of narration that makes the reader Omnipotent. Ghost Station Zero is taking us on a journey and I am loving the ride!