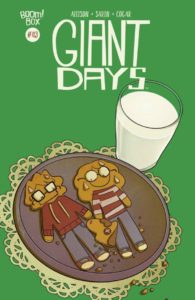 Giant Days #43 sees the arrival of winter and all the holiday festivities that entails. In a desperate bid to afford a plane ticket to Australia, Ed takes a job with Daisy at the Winter Village. As the issue unfolds, it becomes clear that Ed and Daisy are working for a shifty individual who has no intention of paying them.

The issue plays this to comic effect as Ed and Daisy try to quit again and again only to be persuaded by their shady boss to stay. It’s a light-hearted, humorous plot thread but it unfortunately leaves little room for any other characters to shine in this issue. It is wonderful to see Esther trying to write an essay using an only her phone, but there’s just not enough of her.

As always, Sarin’s art provides just as much comedy as the writing through the inclusion of small details like a Mike Pence stress ball. Elsewhere, a truck driver bearing a shocking resemblance to Santa is revealed to be wearing a “More Guns, More Funs” shirt. These inclusions bring extra humor to the issue which helps mask some of the ways in which this issue feels like a bit of a “filler” issue.

Allison is always willing to take his time in developing the various narrative threads. Giant Days is never afraid to let significant narrative threads hang while diving into some entirely unrelated, light-hearted ridiculousness. These are usually welcome divergences that help make the series so good. However, following the significant revelations of issue #42 this issue feels like too much of a tonal shift.

As filler, the issue succeeds in being funny and thematically relevant but I’m hoping the next issue returns to some of the larger narrative beats that make Giant Days so great.