If you’re not already reading God Country, stop what you’re doing and go get NOW. The latest from writer Donny Cates (Buzzkill, The Ghost Fleet, The Paybacks) and artist Geoff Shaw (Faith II, A Town Called Dragon, The Paybacks) is a compelling story that is emerging as one of the top titles of 2017.

For those that have not read it here is a quick recap. God Country is the story of Emmet Quinlan, an old man living in west Texas as he spends his waning years in the grasp of dementia. He is cared for by his son. However, things are looking bleak with Emmet’s mental health deteriorating to a point of being a danger to himself and those around him. The story sets itself up as a family drama but quickly changes when the Quinlan family home is leveled by an enormous tornado, and Emmet emerges a different person. His transformation comes at the hands of an enchanted sword, Valofax, found at the heart of the storm. Holding the sword cures Emmet of his ailments and gives him a new lease on life. Unfortunately, the sword isn’t the only thing to come from the tornado. With the strength of the sword and some west Texas toughness, Emmet becomes entangled in a battle with otherworldly creatures now swarming his property and posing a threat to his family.

First and foremost, this is a story about the Quinlan family. The Quinlans are your average people in American’s heartland, trying to get by and deal with a bad situation. The humanized approach to an otherworldly story strikes a great balance between sci-fi and drama which proves for a gripping read. Geoff Shaw’s art perfectly portrays the west Texas landscape as a place so open that the sky seems low, acting as a staircase for celestial creatures to come to earth. 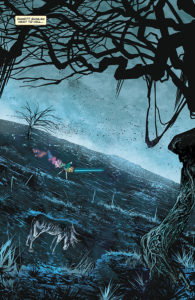 In Issue #4 we see a realm of hell and the leader of the demons, Balegrim, a bald demon that resembles Deadman from DC’s Justice League Dark. Writer Donny Cates uses this setting not as a huge action piece but as a background to the dark psychological torture Emmet has been facing. His mourning along with the realization that he’s been living as a husk for so many years is one of the more heartbreaking moments in comics. The issue backs away from the family dynamic between Emmet and his son, Roy, as we focus more on the stakes of the battle. Will Emmet recover his Grandaughter? Will Valofax be turned to evil? Will the Quinlan house still be standing? Cates also takes a moment for Roy and his wife, Jane, to contemplate spirituality in the face of recent events. These moments of vulnerability add a complex dimension to an extremely well-balanced story. While we do get to see some action in this issue, the real excitement is the set up for next issue. The build up to the big battle has been flawless and this issue is no exception as it further envelopes us in the multifaceted layers of the God Country universe.

Have you seen this:
TLDR #8: Sea of Stars / Red Hood: The Lost Days

I will not be surprised if God Country makes it to the top of many writers’ “best of the year” list. Image continues to put out deep, complex stories that push the boundaries of graphic novels and God Country #4 is no exception. Do yourself a favor and get caught up before Cates and Shaw move into the meat of this West Texas story. 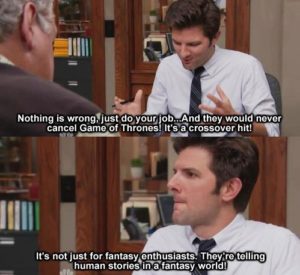