“A short story-driven experience about love, loss and the choices we make.”

Gone Fireflies is an RPG game of bonded fate with a style that is reminiscent of old Pokémon, Nintendo Gameboy games. It’s pleasant to look at but depressing to play through. You have five achievements to unlock which sort of act like chapters, as each character represents a new slot in the story, leading you through the tales of two men, and how their lives end up intertwined.

You start off playing as Tom, which introduces us to his character as well as the story behind his wife, Emily, who suffers from multiple illnesses, along with severe depression to top it all off. It ends with them either considering having a child or it is inferring that Emily is already pregnant (I say this because Alicia and the other wife character to be introduced both go into labor on the same day).
Then, we play as James, which introduces us to his character as well as his wife, Alicia. It happens upon their first anniversary where it is revealed that Alicia is pregnant. Nothing more happens here, but it is revealed later that these scenes were flashbacks, as in the present day, Alicia died during child birth, and their son, Jake, died when he was hit by car as he ran off after a stray dog. 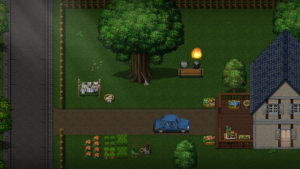 Where do these lives intertwine? Tom and James first met at the hospital when their wives gave birth. Tom lost the baby, while James lost his wife. We see that James lived happily with his son for a few years, and Tom was trying to make things work with Emily who was spiraling further into depression. Just as Emily makes a break through, she hits Jake. Tom convinces them to leave the scene of the crime, but not before calling 911. Did I mention James was a cop? No? Ah. Well he is, and he is called to the scene of a crime years later on the anniversary of his son’s death (I believe) and the scene he is called to ends up being the suicide of Emily, and he has reunited once again with Tom. All throughout this game, you are given choices of questions to ask, and how to say some things, being either positive or negative, which could no doubt influence the end of the game. I chose to forgive Tom in the end as both men had lost two family members, and enough had been done. Tom went home to be with that very stray dog little Jake was chasing, and James went to see a shop owner who he had formed a bit of a relationship with over the years. Each has someone, and they could go on with their lives.

The art was great, a bit old school, and the music was great too, which I believe was copyright-free music as I recognized some of the pieces – especially one of the last pieces in the game. In a world of games that can take a long time to finish, this is a great short play with a satisfying conclusion (because it’s what you make it!).

I haven’t played many RPG-style story-driven games in my very short gaming career, but I will say I enjoyed playing this, and I recommend it for new gamers, story lovers, and those who want a quick play.

Great game for both pro and casual gamers alike, and especially great for those breaking out into the world of gaming.

games gone fireflies indie pc Steam
Are you an Insider?News, reviews, & updates are just the beginning.