Gone too Soon for Nightwing #16 Review 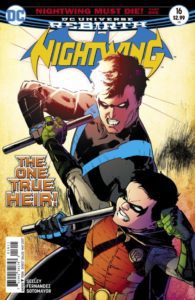 Happiness for super heroes rarely lasts. For Dick Grayson, happiness didn’t last beyond a single issue. Nightwing #16 opens with a flashback to a happy moment with Dick and his new love interest, Shawn Tsang. During the last story arc, Shawn was an art student turned criminal. Eventually she was a reformed criminal and love interest for Dick Grayson. Nightwing #15 covered a two month period of time and explored the developing relationship between Dick and Shawn. The issue was an enjoyable character piece that centered around the growth and discovery of a new relationship and how the couple tried to explain those emotions to others in their life. The relationship development in that issue was something that almost anyone could relate to.

Issue #16 is harder to relate to because most readers have not had a significant other kidnapped by a super villain. But readers can relate to the tragic swings life can take and how a person may seem too wrapped up in themselves until one learns of their situation. Writer Tim Seeley captures those emotions well. Dick Grayson starts swinging fancy free until his world is turned upside down. Damian Wayne storms into Bludhaven to confront Dick about his own self-centered concerns only to discover the real conflict of the issue.

Seeley has set up a plot that should shake Dick to the core of his character. Dick Grayson / Nightwing has always been a brighter presence than Bruce Wayne / Batman. 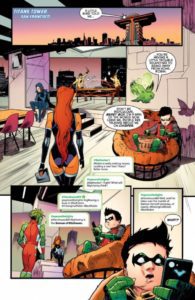 Even during Dick’s stint as Batman, he remained true to his character. Seeley gave Dick someone to love and to grow close to, both are emotions that do not usually end well in comics. If that is the case, Seeley has the potential to have Dick question who he is and what he is doing. Earlier in this series, Seeley had an arc with a character from Dick’s mother’s past. That arc challenged who Dick thought he was. If done well, this arc has the potential to challenge who Dick is going to be.

These are heavy concepts that could be handled well, but it is concerning that the emotional build up of this conflict all happened during one single issue. If readers had spent two real world months with Shawn’s character over the course of a number of issues, the emotional investment could be stronger. The emotion in the last issue was pitch perfect, but the pace was quick. Hopefully, Seeley has crafted an arc that will keep readers emotionally engaged and not try for a quick emotional reaction.

Tim Seeley has been telling heart felt and heart twisting Nightwing stories since the start of Rebirth. This new arc has the potential to be both. As an added bonus, Seeley’s grasp on the dynamics of Dick Grayson and Damian Wayne were entertaining and promise some rewarding team up action. Dick and Damian play opposite roles as Bruce Wayne’s sons and seeing them together again is an added treat.