As we return to the crime-ridden chilling streets of Gotham for the exciting, action-filled premiere of Season 4, we are privy to Bruce Wayne’s new found obsession with patrolling the rooftops of his hometown wearing a ski mask and duster, looking for muggers and robbers to practice his increasing hand to hand combat skills on. As he interrupts a robbery in progress, Bruce discovers that one of the muggers is carrying some type of license for crime. The licenses are revealed to be a product of Penguin, who is supplying them as a way of ‘monopolizing and monitoring’ crime, as a gimmick to ‘make Gotham safer’ which he uses to buy off the Mayer and Police Commissioner, along with 1% of the crime profits to split between them. James Gordon is vehemently opposed to turning a blind eye to the licensed criminals, causing friction to build between him and the rest of the GCPD. One unlicensed gang attempts to rob a wedding but is stopped by Victor Zsasz, who shoots the finger off one of the gang members. The wedding party is thrilled and grateful before Zsasz brings in a group of licensed criminals to resume the robbery. 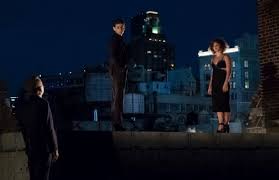 Elsewhere in the streets of Gotham, Selena Kyle lures a group of thugs into a fight, beating them down with her newly acquired Catwoman trademark whip, a fighting style very suiting of her comic counterpart, and some minor help from Tabitha at the end, revealing the fight to be a training exercise to build of Selena’s skill level. After the duo celebrates Selena’s progress with Pizza, they are visited by Zsasz, informing them that if they’re going to commit any crime they’ll need a license from Penguin and to visit him at the opening of his Iceberg Lounge. Embarrassed and furious, the non-licensed gang pays off the Warden of Arkham Asylum to take young Jonathan Crane, forcing him to re-create his father’s fear toxin, crippling him with fear through the use of a scarecrow. At the Penguin’s opening of his Lounge, Bruce learns the who holds the ledger of all crime licenses and briefly reconnects with Selena, apologizing for his behavior at the end of the third season. Gordon attempts to apprehend the non-licensed thugs, now armed with Fear Toxin and planning to ambush the Iceberg Lounge, but Penguin and Zsasz apprehend them first. Penguin prepares to execute them but is stalled by Bruce, demanding publicly if Oswald intends to hand them over to the authorities. This allows the thugs to spray Penguin with the Fear Toxin, forcing him to see Edward Nygma, emerging from his frozen tomb (the centerpiece of the Iceberg Lounge) in a terrifying hallucination, sending Penguin into Gordon’s arms as the thugs escape. As one of the thugs returns to their hideout to get more toxin from Crane, he discovers that Jonathan Crane has fully given into his fear and become what plagues him the most, crippling the thug with a strong dose of Fear Toxin, revealing himself to be The Scarecrow.

The season premiere comes out of the gate strong, giving fans a lot of goodies to sink their teeth into and establishing a few nice arcing storylines to play out over the season. The good far outweighs the bad for me with this episode, with the bad, not even truly being negative aspects, simply falling a little short from the rest of the high points.

The Good
My single favorite aspect of this episode was the final moments, the ultimate reveal of Jonathan Crane emerging as Scarecrow. The costume was perfect, the modulating voice, the body language, and mannerisms. Having one of the ultimate Batman Rogues emerging in a form that Batman fans from whatever medium can appreciate is incredible execution in my opinion. I cannot wait to see the terror and havoc he brings to Gotham. Seeing Bruce and Selena take larger steps towards evolving into their future characters is exciting to watch. While Selena’s hand to hand combat shows considerably better on screen than Bruce’s at this point, I am enjoying the overall changes in tone of both characters, bringing another dimension to their complicated chemistry. The Penguin, Robin Lord Taylor’s portrayal of Oswald Cobblepot has been one of my absolute favorite things about Gotham since the pilot. He delivers such a masterful performance and brings a chaotic genius to the character who has had so many different iterations over his lifetime, having this sociopathic mafioso Don, obsessed with destroying anyone who laughs at or belittles him is absolute gold and unquestionably one of the strongest hinges holding the show’s universe together. 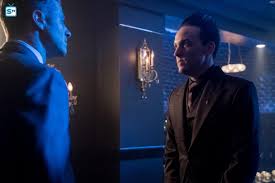 The Bad
Again, none of these are truly ‘bad’ per say, in my opinion, they’re just some of the weaker or stranger elements in terms of the show and its comic source material. Victor Zsasz — don’t get me wrong, I’m a huge fan of Anthony Carrigan’s portrayal, I think his delivery and timing is fantastic. However, with the background of Zsasz that everyone is familiar with, even so far as that during his original debut on the show he was shown as considerably more stoic and carving his familiar hatch marks for his victims into his skin, the wisecracking enforcer is a very confusing adaptation of the quasi-schizophrenic self mutilating sociopath we’re familiar with. Bruce’s fighting style  - I appreciate the steps they’re taking towards Bruce’s evolution towards eventually becoming the Dark Knight of Gotham, and I can definitely see David Mazouz’s dedication to working and training as his role begins to take on more of the expected physicality tied to his character, but at this stage, his fighting caliber is so far from what I have in my head for even a young Batman that it comes off a little lackluster to me. James Gordon since the pilot I have been a little confused and perplexed by the show’s portrayal of Jim Gordon. I’m having a difficult time visualizing him transforming into the character everyone imagines when they think of Batman’s police based partner. His sporadic and virtually unexplained violent tendencies, his constant grimace and talking through clenched teeth, and the simple fact that he is for all intents and purposes supposed to be the ‘principal character’ of the show and since episode one has had scenes stolen left and right by virtually every other character int he cast. It just all in all isn’t a great look. He does fine, if you view him as a support character, how he appears later in Batman lore, but with this show trying to center around him, it just falls a little flat for me.

Moving further into the season I cannot wait to see what the Scarecrow has in store for Gotham, how the young hero and his future villains continue to evolve, and who will step up to oppose the reigning kingpin of the Gotham underworld, the Penguin! Until next time, keep it, nerdy guys.