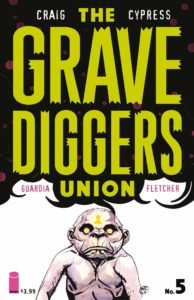 The Gravediggers track down the original prophet in order to find the base for the Black Temple cult. While Morgan tries to get answers.

The story is moving at a fairly quick pace, yet it still feels like the characters are lagging far behind. We’ve known that Cole’s estranged daughter was the new prophet for a while now so the reveal at the end of the issue was a tad anti-climactic. This comic is at it’s best when it embraces the weird. The flashbacks to the “space monkey” are always the highlight of the issues. Not just because of the fantastic art, but because they’re the most intriguing parts of the story. I find the Gravediggers quite likable as characters but their journey hasn’t faced much resistance and their just running in place it seems. But now that both storylines will combine the next few issues look promising. 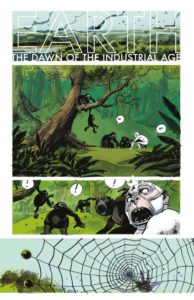 Toby Cypress has such interesting panels, his characters are always expressing themselves, whether they’re moving funny or brooding. Wes Craig’s flashback sequences are always great, and I’m hoping that current story developments don’t mean that we will be losing them. Everything is so creepy and bizarre, it’s perfect artwork for this type of comic book.

The story has finally been going in a much-needed direction. This was a solid issue made even better by the fact that future issues are all but guaranteed to involve some of the freakier aspects of the series. Roided up zombies are weird, but there is a potential to get even weirder. And that’s an exciting prospect.