Greed, in the end, Fails even the Greedy “Hal Jordan and the Green Lantern Corps” #12 (Review) 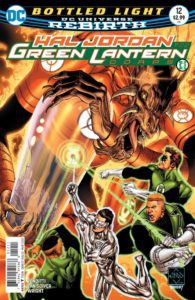 The conclusion of the Bottled Light story arc has John Stewart, Guy Gardner and the combined strength of both the Green and Yellow Lantern corps taking on Larfleeze for the fate of the bottled Xudarian city. Both teams decide to go all in to defeat the Orange Lantern as Hal Jordan, Kyle Rayner and the previously missing Guardians Sayd and Ganthet. As the lanterns start getting overwhelmed, John Stewart and the yellow lantern Soranik devise a plan to increase the power of the Sinestro Corps rings, but the hit Larfleeze where it hurts. At the end of the battle a decision is made that could rock the foundation of the corps itself.

Robert Venditti’s story comes to a satisfying, if brief, conclusion. There were elements that I was following in the previous issues of this arc that I would have liked to see explored a little more in the conclusion, but the overall story remains strong. The interaction and banter between the Lanterns shows how cohesive this team has become under Stewart’s leadership. Ethan Van Sciver’s art is always top notch and he continues to create force and fluidity in both the individual panels, but the splash pages as well. Everything on the page seems to be in motion and the pacing of the art matches the pacing of the story extremely well. 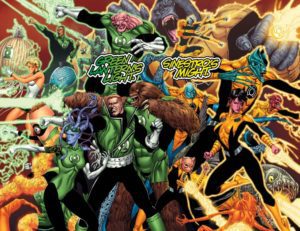 Although I would have liked to see the Larfleeze/Brainiac dynamic fleshed out a little more and a slightly more polished resolution, I continue to be on board for this book and look forward to what is coming next.