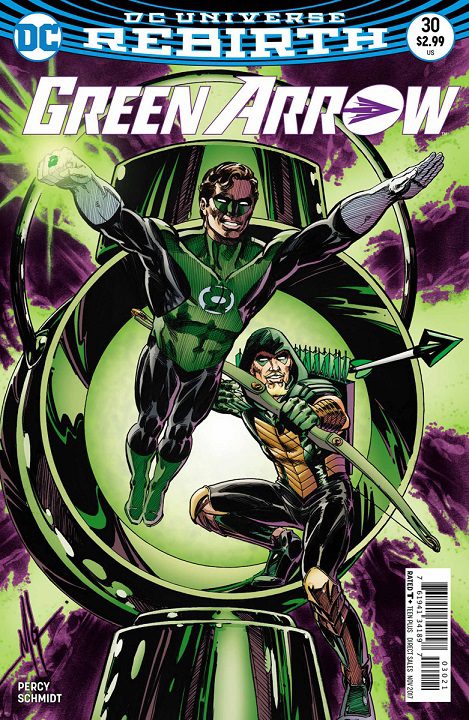 Green Arrow and Green Lantern team up for the millionth time to take the fight against the Ninth Circle to outer space where they must infiltrate the Eye in the Sky. The Eye in the Sky is a satellite used by the Ninth Circle to perform many of its illegal operations such as fronted money that finances wars, and human trafficking. The two heroes are thrust into space after Green Arrow shakes a caravan of bad guys. The two heroes trade quick witted quips and colloquialisms throughout the book, which provides fodder for a snicker here and there. Below the city is Green Arrow’s girlfriend and sister, respectively, Black Canary and Emiko who are searching for victims of human trafficking fronted by the nefarious Ninth Circle. The two of them are ambushed and the story shifts back to Team Larrow who have their hands full on the dark side of the moon. The cliffhanger is incredible and I look forward to seeing what happens next.

Benjamin Percy never seems to fail in giving the reader an unexpected thought provoking story. This one is no different. The back and forth barbs from Green Arrow and Green Lantern are funny at times considering they have a long history with each other. The dialogue that Percy writes is never pretentious. He knows how to hook people with his stories that he weaves in each issue. The Ninth Circle has been one of the more intriguing of 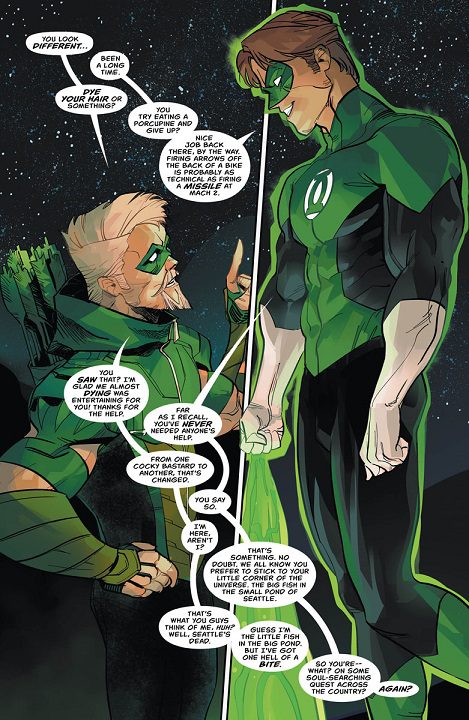 villains since the dawn of Rebirth. The Green Lantern appearance was foreshadowed on the cover’s artwork which is superb. The green light beaming down and Green Arrow aiming upwards at him makes it seem like they are going to be adversaries in this issue. The green beam of light is highlighted by those little white specks you see when the light cuts through a shadow just right. I believe it is called moon dust. This and the majority of the book’s art is excellent and helps to further the reader’s enjoyment of this book.

This run of Green Arrow has been my favorite of all-time. Benjamin Percy’s name should be mentioned in the same breath as some of the new greats like Scott Snyder, James Tynion IV, and Jimmy Palmiotti. Otto Schmidt does an excellent job on the issues that he contributes to especially the covers for issue 8A Island of Scars, which I recently sent away to be graded at the CBCS.