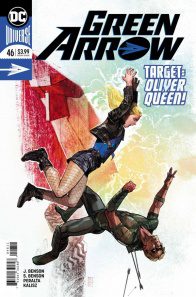 The ending of Green Arrow #46 is a bit perplexing.

So, Green Arrow found out he didn’t actually kill Nadia Vanderberg years ago. One of his other friends was apparently the drunk driver.

But in the course of connecting the dots, he stumbles upon the identity of Citizen. He’s a cop by the name of Joe Stranz. We have no idea why this guy has gone off the deep end. I’m sure we’ll get more next issue.

What boggled my mind, though, was after discovering who Citizen was, Oliver Queen emerged from the shadows and went back into hiding, with the help of the police, yet didn’t reveal who Citizen actually was. Then he gets abducted by who else but Citizen.

This has to be part of the plan, right? Because there’s no way Green Arrow got that dumb out of nowhere. He had to know Stranz would be the cop picking him up. It’s too obvious. Plus, Citizen has proven time and again that he has plenty of resources and always get things done.

So it has to be part of Green Arrow’s plan.

There was one other important piece in Green Arrow #46, along with the ending and the news about the drunk driving incident.

I don’t mean Julie and Shawna Benson wrote the character poorly — I really just can’t stand him. The fact he’s a cop is an interesting twist, for sure. Something tells me he’ll end up being ex-military, too. And that makes sense.

What I can’t stand is he knows for a fact that Oliver Queen was not the drunk driver who killed Nadia Vanderberg. As far as I’m concerned, the only thing Oliver’s really guilty of is being a pretentious dink. Now, this could just be me, but I don’t think this is a crime punishable by death.

But because the narrative “Oliver Queen has done nothing wrong other than being born into privilege,” doesn’t fit Citizen’s plan, he’s twisting the truth. Honestly, I’d respect what he’s doing a lot more if he acknowledged that Queen didn’t kill someone while driving drunk. It’d show how rotten the people he’s targeted truly are.

Lastly, German Peralta did a great job with the artwork this issue. Probably my favorite art from an issue of Green Arrow in at least 15 issues.