Character announcements and story teasers just keep coming in for Netherrealm’s Injustice 2! Just a couple of days ago, Firestorm was announced as the latest character to join the official roster. Here’s his bio from the Injustice website: 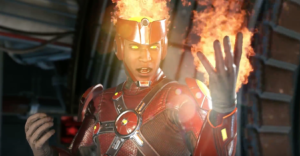 Two minds sharing one super-powered body, Jason Rusch and
Martin Stein are only beginning to master their abilities as Firestorm. However reconciling Jason’s brash personality with Martin’s more empirical approach is no small task. While these two don’t agree on much, one thing they never argue about is helping Batman rebuild a safer world.”

With Firestorm on the scene, we have another addition to Batman’s Insurgency. Which, as the latest story trailer shows, keeps on growing with the likes of Black Canary, Green Lantern, The Flash, and… Green Arrow?? (minor spoilers ahead)

In Injustice: Gods Among Us, it was made very clear that Oliver Queen was killed by Superman, so when Green Arrow was revealed for Injustice 2, we were left scratching our heads. It turns out the Injustice team is using the age-old “alternate universe” trick to bring an Oliver Queen from a different Earth to fight against Superman. Here’s his new bio: 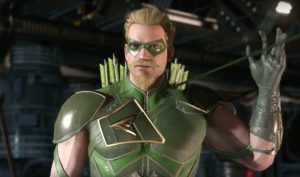 “It’s been a hard traveled road of the emerald archer, as this Earth’s Oliver Queen gave his life in the fight against the Regime. Now as an alternative Earth’s Ollie steps in to honor that sacrifice, he will join his wife Black Canary in Batman’s crusade to set things right.”

Green Arrow’s involvement in Injustice 2 isn’t exactly a “surprise”, since it seemed pretty obvious they wouldn’t do an Injustice game without the Emerald Archer. As excited as I am to learn about how this new Green Arrow gets involved, I’m really just happy to see Ollie back in action – and married to Black Canary no less!