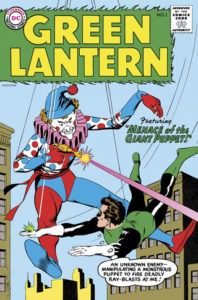 Sometimes you need a blast from the past to remind you of exactly where you come from. 60 years ago we had the first appearance of the Emerald Guardian, the Green Lantern. A man of will and no fear, he was entrusted with the Green Ring and Battery of Power by Abin Sur to protect Sector 2814. Of course, due to an imperfection in the Battery of Power, he is powerless against anything yellow. We’ve heard many stories about the character of the years but now we see two of his original adventures in one issue.

In “The Planet of Doomed Men,” we see the history of how Hal Jordan, fearless test pilot, gained the ring and started becoming the Green Lantern. Afterward, he is called to a planet that is being threatened by a creature who seems to be immediately resistant to GL’s powers. In “The Menace of the Giant Puppet!” a villain that is using an ability to use others to his will. The Green Lantern decides to serve himself up as a pawn. How will things turn out for our hero?

Seeing this first, classic issue was very invigorating to see GL’s humble origins. We’ve seen and heard his origin dozens of times over several decades though it’s great to see the beginning. If you are a fan of the Green Lantern, this original pair of stories is great for the collection and a good reminder of the past.