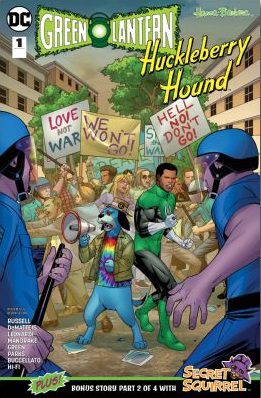 John Stewart is in the midst of his training with Katma Tui and they come to an exotic planet where John is put to a test about the use of and limitations of his powers as a Green Lantern. After learning the lesson, he is given another one by his mentor. He is to go back to Earth and not use his power ring.

Back on Earth, John finds himself remembering the circumstances that led him to become a soldier including the death of his brother after he came home from Vietnam and the racial violence he witnessed at the hands of the police. After seeing Huckleberry Hound doing stand up comedy, he and his childhood hero decide to get a drink and swap the stories of their lives. When another event like the one that killed his brother begins, John must decide whether to use the power he has to end an injustice or follow the rules.

This is an interesting story that definitely has parallels to issues facing many people today. There are moments that are subtle and others that are blatant comparisons of the Nixon era to the current political climate. None of those parallels are over the top or preachy and that helps to keep the reader interested and involved. The only lingering problem I had with the book is the characterization of Huckleberry Hound. His presence in the book was so nebulous that you could have cut him out of the book entirely and the story would still work. It’s problematic because if both characters have equal billing, one would expect both characters to have shared value to the story.

Leonardi does great work with the art in the issue and conveys a gritty style that matches the seriousness of the subject matter.