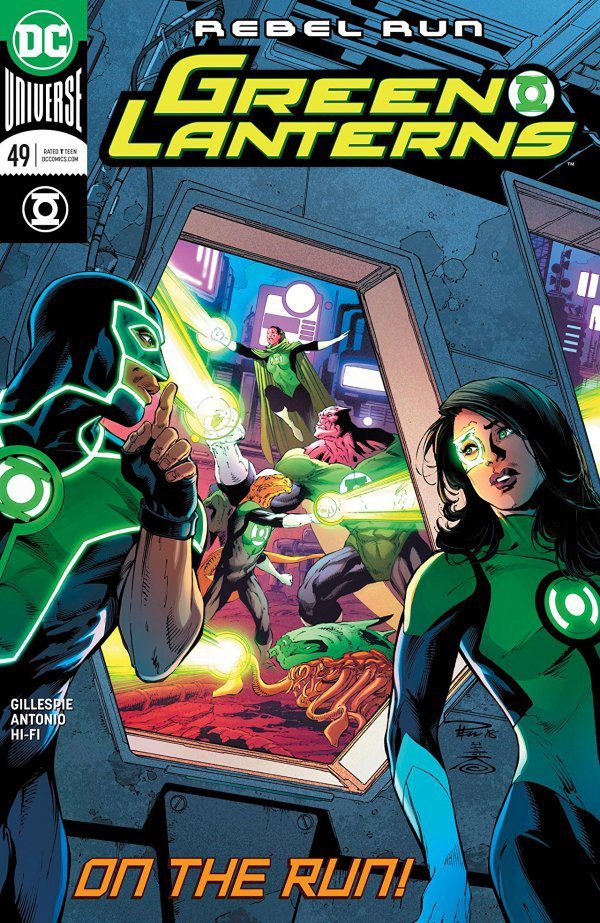 Simon Baz finally catches up with his fugitive partner and he wants some answers. After a brief tussle that drives the pair underwater, the two have it out in order for Simon to finally get some answers to what it happening to Jessica. Simon tries to comfort her and he brings up her anxiety. A thread that gets pulled a little too often in regards to Jessica. Her character seems to constantly have her anxiety as an excuse for her actions or at least a scapegoat for her actions in the eyes of the other character. I diminishes her as a character and reduces her to a symptom rather than a fully realized person.

At the same time, Jessica’s contact decides to go into hiding by making his way to his next job and being let in. What he doesn’t count on is that he is found by Jessica and Simon and it’s Jessica’s turn to get some answers. As the three of them make it off planet, the smuggler tells the two Lanterns everything that he knows about his current employer and what he’s really running out of his pleasure planet. We do get an explanation for Jessica’s actions, but it gets buried in the exposition. The one piece of information that could exonerate her gets glossed over for the most part.

The end of this issue is a little too abrupt. Nothing really gets resolved and Jessica’s outburst doesn’t seem genuine. The story starts to fall apart in the third act and doesn’t really stick the landing as far as closing out this particular arc in a satisfying way. It felt like everything Jessica went through was a waste. The art was great, but the story didn’t go anywhere relevant and was ultimately forgettable.