Guacamelee! has been a longtime favorite of mine. I love a good Metroidvania and I am and always will be a huge wrestling fan so I was already hooked before I ever picked this game up. But then I played it and holy wow is it a well-executed game! So much thought and love went into this title and it shows in everything from its style to its combat to its ingenious world design. If you haven’t had the pleasure, and even if you have (like me!), the Super Turbo Championship Edition on Nintendo Switch is the perfect time!

First of all, let’s just talk about what makes this game work as a whole. It looks great on any size screen. It’s simple but pretty and there are some very nice details sprinkled about the two-dimensional open world you traverse as Carlos, the main protagonist. But let’s say you don’t care for Carlos’ look all that much, well guess what? You can acquire all kinds of great outfits that give you several nice visual options for your character. My personal is the gun-toting Flame Face, whose name should tell you a lot about what he looks like. The music is also fantastic and vibrant giving just the right feel to this world. 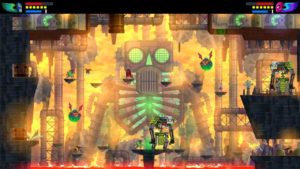 Gameplay-wise there are two elements that really define this game and set it aside from other Metroidvania titles. The first is the combat system. A surprisingly deep combo-based system really keeps the game fresh from start to finish as you unlock new abilities and learn new combos. The other thing, and my favorite thing, are the portals. You can jump back and forth between two separate dimensions by touching floating portals throughout the world. These are really the crux of the navigational puzzle solving that truly makes this game the masterpiece that it is.

If you have any interest in indie games and/or metroidvania style games, Guacamelee! is an absolute must play. I am finishing up my second complete run now and it’s hardly lost any of its flavor at all. It may even be better this time because I’m playing on the Switch which is absolutely perfect for a title like this. For gamers who want a fun challenge, a simple story and a great time, I couldn’t recommend it more!