‘Guardians of The Galaxy 3’ Has Working Title ‘Hot Christmas’ – A Nod To Adam Warlock and Sign It’s Moving Forward Soon?

While there is rumblings the studio is already seeking a new director after the firing of James Gunn, names of candidates haven’t surfaced. A working title might be the next step before new production dates and the naming of a replacement director for Guardians 3. 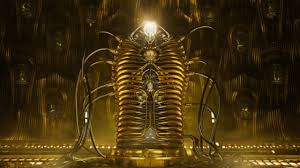 Could the working title be a reference to Adam Warlock? The character has been referred to in certain circles as Marvel’s space Jesus.

There has been some downplaying of Adam Warlock’s participation previously but it seems a little odd since they lined him up in the second film.

Then again, James Gunn had been teasing a potential Christmas Special that could air on ABC.

Filming was originally eyeing a February start in Atlanta, Georgia before Gunn’s exit.

That date seems unlikely as trades have suggested the Gunn script could get tinkering and some rewrites from the next director, to give their creative spin on the material.

The character lineup might also be changing as there talk from Dave Bautista that he likely won’t be returning as Drax due to the handling of Gunn.

Marvel Studios was expected to release Guardians 3 sometime in 2020.