As we wrap up 2018, the GWW Games team reflects on what game they deemed worthy of the title of Game of the Year. 2018 surely proved to be another amazing year for gamers, with so many contenders such as God of War, Spider-Man, Red Dead Redeption and Assassin’s Creed Odyssey, this year was absolutely stacked.

Here are the GWW Games team’s personal choices for GOTY 2018:

Travis Vertuca: Ys (pronounced ‘ease’) is a long-running action-RPG series that has rarely made headway in the US. This year, developer Nihon Falcom and publisher NIS America brought the series back to the west with a remake of the 2016 PS Vita release. And let me tell you, this game is amazing. Played in a third-person perspective, similar to Zelda: Breath of the Wild, Ys finds the protagonists capsized and sea and then trapped on a remote island. Now tasked with survival and escape, it’s up to Adol and friends to fight off the island’s beasts but also to collect the proper materials in order to build a ship and return home.

Exploration of the island is of the utmost importance and the sprawling map is full of gorgeous locales that reward traversing to all regions. The action eschews the traditional turn-based trappings of JRPGs and replaces them with an easy fighting system that resembles a more interactive version of Xenoblade Chronicles. The similarities between Ys VIII: Lacrimosa of Dana and other recent action-RPGs make the title the perfect entry-point for newcomers. Ys VIII was an excellent gaming journey that had the rare combination of a captivating story and action-packed gameplay, making it one of my top games of 2018.

Jaime Montoya: When I think of Game of the Year 2018, I think of Spider-Man. I remember booting up the game for the first time and how amazing it felt to swing around New York City. The characters drew me in from the first scene, I was intrigued by the story from the get-go, and though the story was predictable at times it was a story I couldn’t stop talking about with my friends. Spider-Man made me care about its world and about its collectibles. I ended up platinum the game without even wanting to platinum it, due to how enthralled I was with the game. Spider-Man for me was a game that I would get home from work and I would play for hours. I would wake up a couple of minutes early before going to work just to play the game. When I was at work I couldn’t stop thinking of the game, I can easily say I was obsessed with this masterpiece. The game delivered in every aspect. The combat was fluid, the suits were cool, the characters made you feel what they were feeling. In my years of gaming not a lot of games have made me shed a tear, but as the story for Spider-Man came to an end, my eyes couldn’t help but fill with tears.  Spider-Man Is without a doubt my game of the year.

James Panto: My personal Game Of The Year for 2018 is Marvel’s Spider-Man by Insomiac Games for the PlayStation 4.  From the moment I loaded up the game, I was blown away by the quality of the graphics.  The facial animations are top-notch and the voice-acting is stellar.  The story is also fantastic and features a wonderful new take on the character of Mary Jane Watson.  No longer is she a model/aspiring actress, but instead an investigative journalist.  I loved this change because it really made MJ feel like a much stronger and more independent person than the usual “damsel in distress” motif seen in other media.  The gameplay is incredibly fun as well.  The combat is fast, fluid and dynamic (a perfect fit for Spidey) and traversing the city hasn’t been this fun since Spider-Man 2 on the PS2/Xbox/Gamecube.  The game is also chock-full of side-missions, hidden collectibles and unlockable costumes that really make exploring every nook and cranny of New York as rewarding as possible.  I haven’t had this much fun playing a game (or completing a game) in years. If you have a PS4, you NEED this game in your collection!

Danny Benavides: This was the game I waited years for and it was well worth the wait. This is a true Spider-Man story. Insomniac blew everyone’s mind with this one. The action, the combos and fight sequences are insane, and are so smooth. All the characters shine in this game, including the villains and sub characters. This is a fresh interpretation of the Spider-Man, Miles, MJ and the rest of the supporting cast. The game begins with an action-packed fight against Kingpin and takes you on a journey throughout Parker’s life as he faces off against familiar foes such as Tombstone, Vulture and Rhyno.  This is one of the best OR THE BEST superhero game to-date.

Everyone shines, including the subcharacters and villains.  I own 3 copies of this game and I regret nothing.

Joe Barhoum: As a father of 2 girls, my time with Kratos, the father, was emotionally powerful. The moments where he showed his love to Atreus, reminded me so much of I love my girls. Even while Kratos was making mistakes, I still related to him. There is no proven science behind how to be the perfect father. You get better with time and make mistakes along the way. Certainly, the technical execution of the game was fantastic as well. It’s one of a few games I’ve ever platinumed. I loved the puzzles, the world design, and the characters.
Looking ahead into 2019, where my wife is expecting our first boy, I know I’ll try to do things differently and I’ll make new mistakes that could strengthen or weaken the bond between father and son. I’m not saying I’ll do it like or unlike Kratos. Rather, when a game speaks to me on this level, while also executing well as a video game, it is my game of the year.
Octopath Traveler
Square-Enix
Brian Villar: Game of the Year, this is a hard one for me as I am a very casual gamer. I only beat Super Mario Odyssey because of how easy it is to bring the switch with you. I know God of War, Spider-Man and Red Dead will get a lot of the praises as they were stand out titles. So with that my GOTY is Octopath traveler. The reason started with the demo. You got the full game for 3 hours and whatever progress you made there would transfer over to the game after you purchased it. This, along with a great story, JRPG style mechanics and the beautiful graphics made it stand out and is why I think it’s the GOTY.
Red Dead Redemption 2
Rockstar Games
Gabe Amaya: Amongst the incredible lineup that 2018 has delivered us, including games like God of War, Spiderman, Forza Horizon 4, Detroit, heck even COD:BO4 was great, one made me put in a serious amount of hours more than the others. That game was Red Dead Redemption 2. This game was in development for a while and it shows with the use of great detail shown. I’m talking incredible detail like a horse dropping his business on an NPC and the NPC reacting accordingly and it realistically drips from his carcass. The game also includes an immersive and massive storyline with great writing and score. To add to this, the online experience is playing out to be epic. Best Indie: Octobpath. Art direction, depth, and score were amazing and can’t be overlooked. 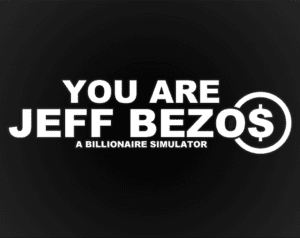 You Are Jeff Bezos
Kris Ligman

Andrew Martinez: My Game of the Year is the free Twine game You Are Jeff Bezos. In it, the player wakes up in the body of Jeff Bezos with a singular goal: to spend every bit of the 156 billion dollars that Bezos is reportedly worth. The game is charming, hilarious, and so infuriating. It takes an unflinching look at the gross, unethical, and frankly unfathomable idea of being a billionaire. What would you do, the game asks, if you woke up with more money than any one person should ever have?

2018 was a bad year. Like 2017 before it and 2016 before that, it feels like the year that will not end. Every day is another disaster, another shooting, another crisis, and, of course, another tweet. The problems in our world seem too big, too complicated, and just too much for any of us to change. You Are Jeff Bezos is a game that acknowledges this frustration and provides the truest power fantasy of all: the ability for one person to see problems in the world and to fix them. I hate that in 2018 this game feels so relevant and necessary, but I also love that this game exists and hope everyone plays it.

game of the year god of war GOTY red dead redemption spider-Man you are jeff bezos
Did you miss breaking news?We publish new content every day.