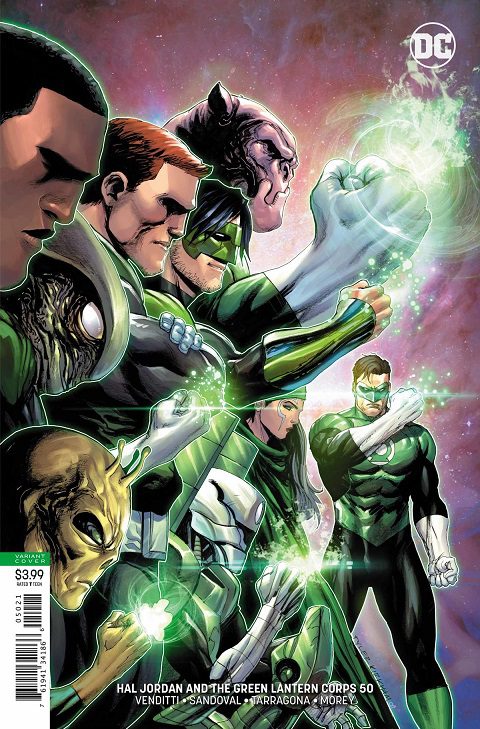 After severing the connection between the Darkstars and the Controllers, Hal Jordan and Tomar-Tu continue to battle with the son of Tomar-Re looking to end the Green Lantern Corps once and for all. As he continues to preach the philosophy of an eye for an eye, John Stewart finds himself trying to keep his ragtag group of allies from crossing the line into killing someone. What’s funny is that Arkillo is the one they should worry about the least. It’s a great scene between Hal and Tomar when Hal finally realizes what the true problem with the former lantern is and how his will might be what it takes to end the Darkstars once and for all.

The fight continues to rage in space and in the midst of the battle Zod finds himself questioning the decision to not kill. A question that it will take more than one Lantern pointing their ring at him to answer. As the battle reaches a fever pitch, revelations are made, alliances are tested and Hal discovers a truth about himself that leads him to make an interesting decision.

Venditti does a great job of wrapping up this storyline. Having the Lanterns confront the Darkstars in the way they did was well done. There are some really interesting story points and I really enjoyed the end of the issue and what it could mean for Hal moving forward. The only plot point that felt off to me was the Zod turn in the issue. I knew it was going to happen at some point, but his final confrontation towards the end seemed to come from nowhere. I can’t remember this particular motive being established so his targeting of Tomar-Tu seems out of place.

Sandoval’s art is a standout in this issue and I truly enjoyed watching the progression of the panels in the story. They moved with the narrative and went a long way towards building on the tension in some moments and slowing down for emotional moments in others.