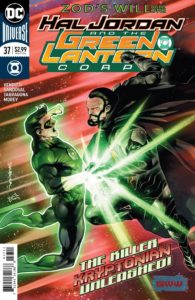 “POWER OF ZOD” part one! After a recent battle with Superman in ACTION COMICS, General Zod recovers as he takes control of a small, undeveloped world. When Hal Jordan investigates, it sets the course for a confrontation between the Kryptonian warrior and the Corps’ bravest and brightest Lanterns.