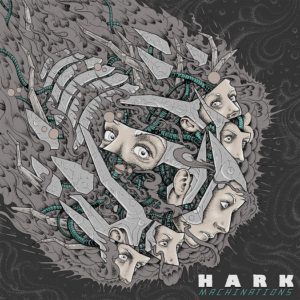 With Machinations, HARK deliver a perfectly crafted vision of hard-hitting heavy rock, expanding on their simultaneously progressive and muscular sonic palette. The weight and bombast is intact, but newly expanded to include virtuoso leads and melodic finesse. HARK v2.0 is now officially in widescreen, and Machinations beautifully precise pummeling proves them a genuine force to be reckoned with. Machinations showcases HARK’s new lineup, including new lead guitarist Joe Horvatt, and bassist Tom Shortt, alongside founding members Jimbob Isaac - guitar/vocals, and Simon Bonwick - drums.

HARK have announced a European album release tour. The tour begins on March 8, and sees the band playing alongside CONAN and DOWNFALL OF GAIA. A full list of confirmed dates can be found below.