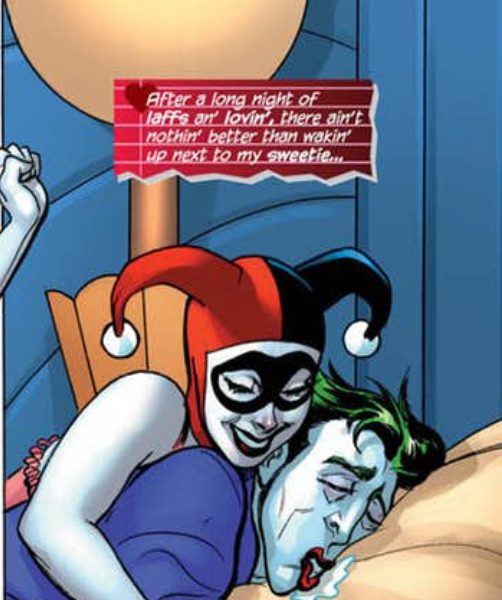 DC Comics’ Harley Loves Joker two-issue issue nod to the animated series written by Harley’s co-creator Paul Dini. It begins in with Miss Quinn speaking of the most infamous dysfunctional relationship in the history of comics, her and her ‘puddin’s’ the joker as being safe and sound. Meanwhile, she needs 3,000,000 dollars to keep them from being destroyed by a gang. There’s a new villain out there breaking into all the banks and jewelry stores so her and joker need to find the one they call Grison so they can be back on top. There’s so many adventures with grison to come. She’s an animal junkie with a flatulence weapon. Yes. I said that. Turns out she’s a blast from the past and it’s not a fun memory. Turns out Joker has plans for the new intruder in Gotham after she shows some potential and Harley isn’t happy.

This comic is super enjoyable. As a HUGE fan of Batman: The Animated Series, it’s like my favorite cartoon in comic form. I loved the idea of adding this character Bison. I haven’t read any of the new Harley Quinn books after the first couple of her Rebirth solos didn’t sit right with me so she’s brand new to me. The back story between the two is interesting. Harley has “stabilized” a home for them and the gang she owes money to are kind of boring but the rest of the story is quite interesting.

I wasn’t sure I’d enjoy this until I saw who was writing it. That’s what made me pick it up. It’s a fun read and the art is sick! The old school Harley Quinn. Not the trashy ones I see in some of the recent art. It’s also the adventures I miss in the newer suicide squad comics revolving around her. I read it in Mark Hamill and Arleen Sorkin’s voices. I recommend it if you enjoy fun comics involving the shenanigans the caped crusader used all his fun cadets on when you were kids.