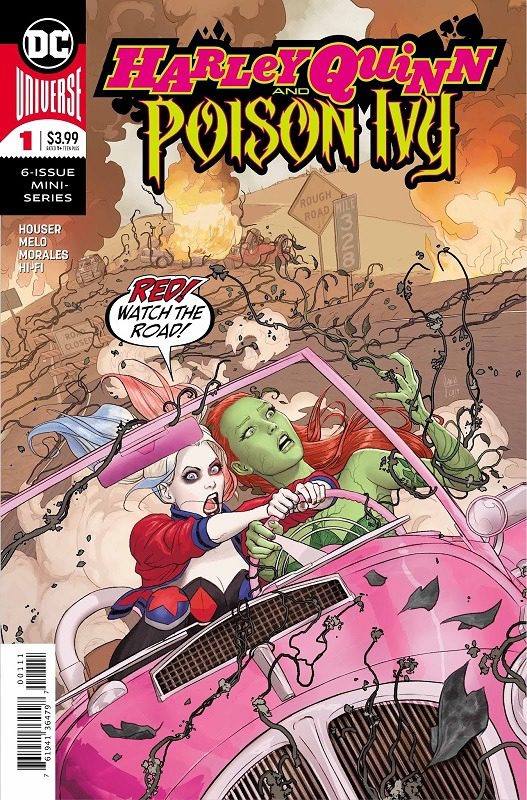 Spinning out of the pages from Heroes in Crisis comes the title that pairs the wacky duo of Quinn and Ivy. Are they friends? Are they lovers? Are they able to carry a comic title? If the first issue is to be the judge then the odds aren’t better than 50/50.

Picking up where Heroes in Crisis left off Harley and a newly resurrected Ivy are trying to decide what to do with their lives next. In the midst of a shopping spree Ivy begins to fall apart, unable to keep her form. One day later and a mysterious box from Lex Luthor later, Ivy is fine. Harley suggests that the two have been terrible villains, but might make better heroes. Then the pair are attacked by The Floronic Man.

This was an average comic from top to bottom. There are bits and pieces to like, but there are other areas where the book fails. Fans of these two characters are going to buy this title regardless of quality or storyline, but for the rest of the comic loving community this book really is a take-it-or-leave-it proposition.

This was a weak introductory issue for new readers. Why are these two together? What is their relationship status? Are they two single ladies trying to live it up in the city; viva la girl power!?! or is this a romantic comedy about two women in love who are just trying to build a life together and their superhero lives keep screwing things up? DC seems to be skirting the issue by trying to have the characters walk a tight rope between friends and lovers to avoid any negative backlash. If this comic is going to continue for any duration the publisher is going to have to pull the trigger on one result or the other.

Houser’s plot is paralyzed by this indecision and the comic limps its way forward without any heart or real direction. The traditional comedy of Harley is here, she’s never at a lost for quips, but Ivy becomes almost a background character in her own title. While the threat at the end of the book comes for Ivy, the previous pages are devoted to and focused mainly on Quinn. The issue just seems to be happy to spin in circles, going nowhere. And the Floronic Man? Really? That’s a bit of a reach for a bad guy.

Melo’s artwork is your standard superhero fare. There are panels where the expressions on the characters are above and beyond, but when you look at the art in total, it’s good, but not great. The Florinic Man looks ridiculous, the blooms that make up his eyes look like two inflamed anuses. There are numerous panels where the figure work and anatomy look stiff and wooden. There was also a few facial shots towards the very end of the issue that look rushed and off center.

But for all my gripes the book looks like your standard superhero comic. The coloring and the lettering were both good. Showed great balance and added to the book without getting in the comic’s way.

I had much higher expectations going into this series. I figured that if DC was going to launch another Harley-centric title that they would come out of the gate strong and make a big statement with issue number one. Instead the book just yawns, rolls over , and falls asleep before it even gets going.